the champion who saved Jews 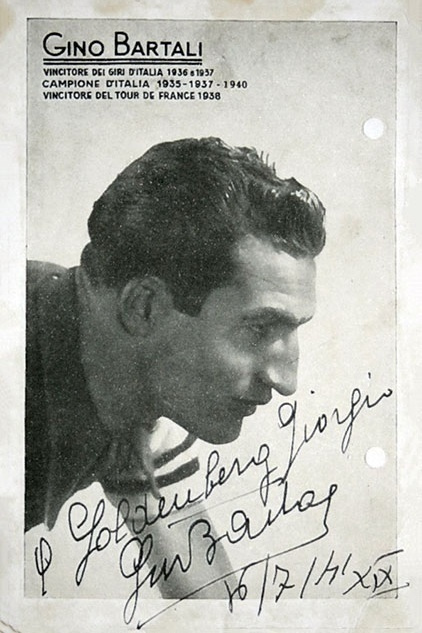 Gino Bartali, born in Florence in 1914, was a champion road cyclist who won the Italian Giro d'Italia multi-stage race three times (in 1936, 1937 and 1946) and the Tour de France twice (in 1938 and 1948). Due to his remarkable sportive accomplishments, he became a most popular and widely admired national hero.

Bartali was a devout Catholic. According to his son, Andrea Bartali, Archbishop Elia Angelo Dalla Costa (recognized as Righteous Among the Nations in 2012) had married his parents and maintained a close relationship to their father. Consequently, following the German occupation of Italy in September 1943, Bartali, who was a courier for the resistance, came to play an important role in the rescue of Jews within the framework of the network initiated by Dalla Costa and Rabbi Nathan Cassuto. Bartali, who was known to cover large distances with his bicycle for training purposes, transferred forged documents that were hidden in the handlebar and seat of his bicycle from one place to another. His activity spanned over a wide area. He also distributed forged documents that were produced by the Assisi network, another rescue operation initiated by Church people in that town. When Bartali was stopped and searched, he specifically asked that his bicycle not be touched since the different parts were very carefully calibrated to achieve maximum speed.

Giulia Baquis told Yad Vashem that during the German occupation she was in hiding with her family at the home of two sisters in Lido di Camaiore in Tuscany. One day a cyclist arrived at the door with a package and enquired about her family. The older sister was away, and the other feared that the stranger was a collaborator, and therefore denied any knowledge of Baquis’ family. The courier left without delivering the package. After liberation the resistance member who had arranged the hiding place for them told Baquis’ parents that the messenger had been Gino Bartali. Another witness, Renzo Ventura heard his mother, Marcella Frankenthal-Ventura, say that she and her parents and sister had received false papers that were brought to them by Bartali on behalf of the Dalla Costa network.

The Goldenberg family had met Gino Bartali in 1941 in Fiesole. Shlomo Goldenberg-Paz, who was 9 years old at the time, told Yad Vashem that he remembered a meeting with Bartali and his relative Armando Sizzi, who was a close family friend. The two sat with Shlomo’s father and had “a discussion of adults”. He remembered the event well because the renowned cyclist had given him a bicycle and a photo with a dedication, which Goldbenberg-Paz has always kept. During 1941 the conversation with Bartali could not have dealt with illegal papers, but meeting his childhood hero became engraved in Goldenberg’s memory.

When later on, following the German occupation in 1943, the Goldenbergs went into hiding, Shlomo was first sent to a convent, but then joined his parents who were hiding in an apartment in Florence belonging to Bartali. The apartment was occupied by Armando Sizzi, but Goldenberg told Yad Vashem that his parents told him after the war that throughout that time Bartali helped and supported them. Goldenberg’s cousin, Auerlio Klein also fled to Florence because he had heard that one could obtain forged papers. He stayed in the apartment with the Goldenberg family for a short while, and then fled to Switzerland with the help of forged documents. Klein told Yad Vashem that Shlomo Goldenberg’s mother had received forged papers from Bartali, and that she was the only one in the family who dared set foot outside the apartment and go shopping.

After the war Bartali never spoke of his underground work during the German occupation. Hence many of his courageous endeavors remain unknown. Sara Corcos, who worked for the CDEC (Centro di Documentazione Ebraica Contemporanea) in Milan, told her niece, Shoshan Evron, the daughter of Rabbi Nathan Cassuto, that she had met Gino Bartali after the war. He emphatically refused to be interviewed, and said that he had been motivated by his conscience and therefore did not want to have his activity documented. Only when Corcos told him that she was related to the family of Rabbi Cassuto, a deeply moved Bartali agreed to speak, on condition that she would not record him. In the conversation that followed, Bartali told Corcos about the forged documents and about his role in distributing them.

In 2013 Yad Vashem recognized Gino Bartali as Righteous Among the Nations.