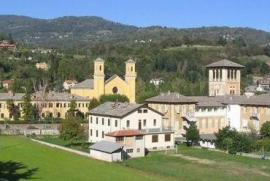 In December 1943, as a 14-year old Jewish girl, I had found shelter with my parents Bonaparte Ottolenghi and Matilde Terracini, with my aunt Livia Terracini (widow of professor Giacomo Tedeschi’s) and her 11-year old son Giuseppe, living at the home of the Baridon family in a hamlet of Bobbio Pellice. After the first partisan battle near there, the Germans started rounding up the Jews home after home, and we were compelled to move with forged documents to get through the checkpoints. To get those documents I headed to dr. Gherardi, an engineer who was the father of a school mate of mine. He told me about "a clerk of the register office of Torre Pellice who forges them to help partisans and Jews ". Such a selfless help was essential to us: we did not have enough money to pay for the documents on the black market,where their prices were huge, and without them we could not escape from the Germans. Instead, thanks to this clerk, we became the Ottone family and my aunt became Livia Tosco. Those ID cards would accompany us to the end of war and made it possible to us to survive. Only many years later I discovered by chance the name of the clerk, who had been deported to a concentration camp in Germany because his underground activity: he was Silvio Rivoir, born in Torre Pellice on 8 April 1906 and still living there.

Rivoir said he had been asked to forge the documents by a communal clerk, Secondo Sereno, who in September-October 1943 provided him with the information about those in need for forged documents as well as their photographs: che gli forniva le segnalazioni e le fotografie, verso settembre-ottobre del 1943: "On the photographs there were not their true names, I had better not know them. I put the data that were told me, I prepared the document with all the necessary stamps. People came from Turin, Rome, Florence, and Frosinone, they were nearly 60 people. At the end of March 1944 a partisan arrivd just when I was about closing the office. I forged his documents, but that very evening he was captured and confessed my name. Germans immediately came to arrest me and took me into jail in Turin." To save himself, Rivoir asked to be enlist as a “volunteer” worker in Germany, but there he was sent to a concentration camp. He escaped through the barbed wire that was no more electrified in the last days of war, on 19 April 1945, he succeeding in getting back home, but he never managed to be recognized as a political deportee because he had requested to enlist as a “volunteer”.

A humble man, Rivoir had a brave wife who shared in his choices and risks. Today he is over 90 and he deserves being remembered for his solidarity effort for the rescue of persecuted people.