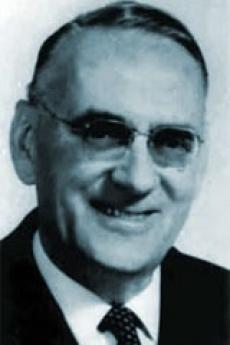 Carl Lutz was born in Walzenhausen, a mountain village in south-eastern Switzerland, whose inhabitants formed a sort of autonomous community of cattle breeders and farmers.
His mother taught religion in the Methodist chapel on Sundays, while his father owned a small marble quarry. Carl was the Lutz’s ninth child and he spent his childhood and adolescence in this very puritanical community which gave him his lasting sense of social commitment and personal responsibility, while his mother encouraged him to study hard and take his work seriously.
In 1909 his father died of tuberculosis and despite finding school boring, Carl completed his studies and started to work as a sales apprentice.
In 1913 he decided to emigrate to the United States, but his impact with the new world was very disappointing: anyone without money or specialized skills had to make do with a blue collar job in a factory or as a simple office clerk.
After the call to arms during World War I, in which he was constantly moving from one state to another in order to stay one step ahead of the recruiting agents and stick to his pacifist principles, Lutz started to study Latin and theology, which gave him a job in the Swiss embassy in Washington D.C.
Then just twenty-five, Lutz was fascinated by Washington, and by the political power and diplomacy that animated the life of the capital. Encouraged by the Swiss ambassador Marc Peter, he enrolled in Georgetown University (a breeding ground for America’s top diplomats) from which he graduated with a Liberal Arts Degree in 1928 and started a brilliant career in the diplomatic service,
In January 1935 he married Berne Gertrud Frankhauser and that very same evening departed unexpectedly on a mission to Jaffa, in Palestine.
When war broke out in 1939, Germany asked Switzerland to represent its interests in the region and Carl was promoted Vice-Consul. At that time, assisted only by his wife, he dealt with the destiny of some 2500 German nationals and managed property assets worth 25 million pounds sterling, while at the same time sending numerous reports to Berne on the conflict in Palestine. The efficacy with which he performed his duties earned him the congratulations of the German minister for foreign affairs in a letter addressed to his Swiss colleague Motta, a person who was to play a vital role in his new post in Budapest, where Lutz was transferred in January 1942. Here, as well as acting as Vice-Consul, he also represented the United States and Great Britain, whose consulates had been abandoned because of the war, in addition to workign with the Jewish Agency for Palestine.
Initially, Lutz implemented the agreements stipulated with Great Britain, successfully transferring 10,000 children to Palestine, but in 1944, with Germany’s occupation of Hungary, new anti-Semitic laws came into force and Eichmann arrived in town. Lutz realized that his commitment could no longer stay within the confines of a simple diplomatic post.
With the Nazi occupation now a reality, Lutz devoted himself body and soul to rescuing the Hungarian Jews still left in Budapest. He managed to negotiate a deal with the top echelons of the SS and of Horty’s regime to save 8000 Jews and ensure that 72 buildings, including the “glass house” in which he concealed many of the Jews remaining in the city, were declared extra-territorial. Thanks to the creation of a “Department of immigration of the Swiss legation”, he distributed an enormous number of letters of protection.
In 1945 the horror finally came to an end, and Lutz and his wife returned to Switzerland where they were horrified to find that nobody was willing to take them in.
Exhausted, his nerves shattered by months of tension and continuous bombardments, Carl spent several weeks in a psychiatric clinic in Zurich. In the meantime, his marriage had floundered (he divorced Gertrud to marry Magda, a woman he had met in Budapest and whose daughter he then adopted). The government decided to open an inquiry into his dealings in Budapest: he was accused of overstepping the limits of his brief by trying to rescue Hungarian Jews. The judge he appeared before acquitted him, but Lutz gave in his resignation in indignation. He then became an attorney in Berne, settled there definitively and remained there until his death. He died, aged eighty, on 30 March 1975, without ever having been able to heal the indelible wound inflicted by his own country.
The true story of Carl Lutz only came to light many years later, and only in 1995 did the federal government apologize for having forgotten him for such a long time, defining him as “one of the eminent citizens in the nation’s history”. In 1964 Lutz was nominated “Righteous among the Nations” by Yad Vashem. His name was also put forwards for the Nobel Peace Prize and in 1991 the city of Budapest dedicated a monument to him.

During his term of office in Budapest, Carl Lutz saved sixty-two thousand Jewish live, out of an estimated total of only 124,000 survivors in the city at the end of World War II.

Carl Lutz is honoured in the Gardens of Duino - United World College of the Adriatic e Yad Vashem.