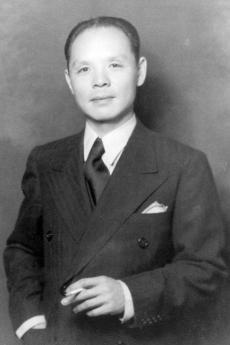 Dr. Feng Shan Ho, was given the title of Righteous Among the Nations. He was one of the first diplomats to save Jews by issuing them visas to escape the Holocaust. He was responsible for saving thousands of Jews in Nazi-occupied Austria in 1938 and 1939, yet he was completely unknown, even by the people whom he saved.

He was born on September 10, 1901, in rural Yiyang in Hunan Province, China. Poor and fatherless by age seven, he and his family were helped by the Norwegian Lutheran Mission.

Feng Shan Ho was a western liberal arts education and he was steeped in Confucian ethics. Ho possessed a dynamic, outgoing personality, boundless energy and a hot temper, offset by a quick wit and great sense of humor. He was described as a man with a "compassionate heart".

Dr. Feng Shan Ho was posted as First Secretary to the Chinese legation in Vienna in the spring of 1937.

Because of Ho's mastery of German and his dynamic personality, he was active in local cultural and intellectual circles. He was in great demand as a speaker on Chinese culture and customs. He had a wide ranging circle of friends in Vienna, especially among the intelligentsia, many of whom were Jewish.

At the time, Vienna had the third largest Jewish community in Europe. After years of assimilation, the Jews of Vienna seemed to be accepted into Austrian society. But this acceptance was only superficial.
Following the Anschluss in 1938, 185,000 Jews there were subjected to a severe reign of terror and all foreign embassies and legations in Austria were closed. He was horrified by the fanatical welcome the Austrians extended.

Ho got orders to dissolve the legation and set up a Consulate General, In May 1938, Ho was appointed the Chinese Consul General in Vienna.

The Jews of Austria were increasingly in danger, and they needed help. The rush for visas assumed panic proportions during and immediately after Kristallnacht, in November 1938, when thousands of Jews were thrown into concentration camps.
Vienna became the center for emigration of Austrian Jews. All foreign consulates in the city were besieged by desperate Jews day after day, but most did not offer help.

Ho practiced a "liberal" visa policy, authorizing the issuing of visas to any and all who asked.
Eric Goldstaub, a 17-year-old Viennese Jew, was turned down by 50 consulates in Vienna before he went to the Chinese Consulate, where on July 20, 1938, he obtained 20 Chinese visas for himself and his extended family.

Shanghai was under Japanese occupation and a visa was not required for entry. But a visa, as proof of destination, was necessary for Jews to be allowed to leave Austria.
The Viennese Jewish community was officially dissolved in November 1942. By the end of the War, more than 65,000 Austrian Jews died in Nazi concentration camps and ghettos.

After war, Ho chose to remain loyal to the Chinese Nationalists, who had fled to Taiwan. He was ambassador in Egypt, in Middle Eastern countries, Mexico, Bolivia and then Colombia.
In 1973, after four decades in the diplomatic service, Feng Shan Ho retired to San Francisco, where He was a founding member of the Chinese Lutheran Church.
He wrote his memoirs, "Forty Years of My Diplomatic Life," published in 1990.

On September 28, 1997, Ho died at his home, attended by his wife and daughter. He was 96 years old. His spirit remained undiminished to the end.