displaced in Pedemont, he took away with himself a Jewish family 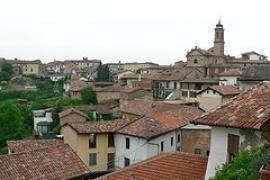 A view of Asti

I would like to make known the events related to my family, particularly my father Ugo Moglia, who during WW2 helped take into safety the family of the Milanese bankiers Rosemberg-Colorni, formed by Dad, Mom and two children, Maurizio and Vittoria.

We had evacuated from Settimo Torinese to the city of Castelnuovo Don Bosco, in the province of Asti, where my Dad found a shelter for the Rosemberg-Colornis. In the following days he provided them with another hideout near Albugnano, in the same province, until they found a way to cross the Swiss border and thus get definitively into safety.

After the war, in 1955, Mrs. Rosemberg-Colorni had a certificate released for my father in sign of gratitude for the aid lent under such difficult and dangerous circumstances. Here is the text:

"The Jews of Italy with gratitude" From the Union of the Italian Jewish Communities - Committee for the celebrations of the Tenth Anniversary of the Liberation.

The President of the Committee, lawyer Giuseppe Ottolenghi