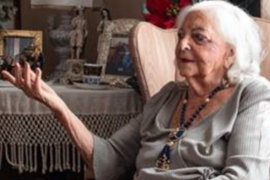 Giorgio Paglia e Maria Lucia Vandone, always known as "Cicci", met for the first time in the spring of 1940. During this years, the outbreak of the war had tragically upset the life of people. Giorgio was a young boy who attend military school, he was a fascist hero's son. However, he strongly disapproved his father's ideals. Cicci had just finished hight school and she had no intention of passively witnessing the tragedy that involved everyone's life.

Giorgio e Cicci chose to go against the regime. Together they met Count Luchino del Verme, who became partisan leader in the Pavese area.

At the risk of their own lives, they saved some Jewish children form persecution. They hid them in the apartment rented by Paglia in Lanzo d'Intelvi, on the Switzerland's border. In the evening the children's parents went there with their children and, in the middle of the night, Giorgio and Cicci took the children across the border to deliver them, along with some money, to their accomplice. They thus saved about fifteen of them.

In the spring of 1944, Giorgio, in order to escape the announcements of the republic of Salò, joined the partisan groups operating in the Bergamo area. In the same year, Cicci also worked for the cause. The deputy director of the Bank of Italy, a close friend of her father, allowed her to use an office, from which the girl collaborated with the partisans of the Fiamme Verdi brigade and collected food and money for the fighters.

In fact, on November 17 of that year, Giorgio and his companions were captured in Malga Lunga, Bergamo's area. Cicci would later say that Giorgio had been probably betrayed, but he decided not to hide.

Faced with the firing squad, Giorgio Paglia decided not to abandon his companions despite the fact that he would be granted a pardon in honour of his father's gold medal. He died at the age of 22 shot by the fascists. He was awarded the gold medal for military valor in memory with the title of combatant partisan.

Cicci swore to Giorgio that she would not tell their story to anyone, but after a few years she realized how important it was to tell. Since that day, she has dedicated her life to those memories and ideals. Today, at the age of 96, she remembers her own battle for freedom alongside the partisan Giorgio Paglia.