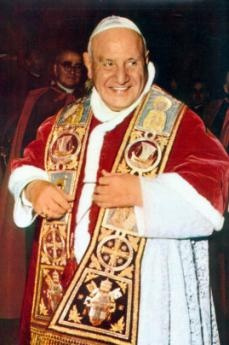 Angelo Giuseppe Roncalli was born into a family of humble origins in Sotto il Monte, near Bergamo, November 25, 1881. He was the eldest son of Marianna Mazzola and Giovanni Battista Roncalli. He was baptized the same day by the parish priest, Father Francis Rebuzzini and his godfather is his uncle Xavier Roncalli, an educated and devout man, from which young Roncalli receives his first Christian ties.

In November 1892, thanks to the support of Don Rebuzzini, Roncalli was admitted to the seminary of Bergamo, where he began preparing for the priesthood by receiving the clerical habit at only fourteen. In January of 1900, he made his entrance to the Roman Seminary dell'Apollinare. On July 13th, 1904,  he obtained a doctorate in theology and August 10th, 1904 he was ordained priest in the Church of S. Maria di Monte Santo. He began his studies in canon law, but they ended when the new Bishop of Bergamo, Bishop James Radini Tedeschi chose him as his secretary. This did not prevent him from teaching in the seminary and continuing his study of history and editing the periodical "The Diocesan Life". The death of Radini in 1914, ending Roncalli's experience, was arguably the fundamental first step of Roncalli's path of becoming Pope.

In the three years following the outbreak of the First World War in 1915, he worked as a chaplain with the rank of sergeant in the care of wounded soldiers in the hospitals of Bergamo. In July of 1918, he agreed to serve the soldiers suffering from tuberculosis, knowingly risking his life with the danger of contagion.

In December, 1920, Pope Benedict XV asked him to preside over the work of the Propagation of the Faith in Italy. Roncalli had just working in Bergamo at  the House of the students, an institution that serves as an intermediary between retirees and the college. After strong hesitation, he accepted the assignment that was very sensitive to the relationships with existing missionary organizations. With enthusiasm and great sense of responsibility, he was appointed and succeeded in moving away from the strictly bureaucratic logic that characterized  many offices of the Church. He then embarked on a journey that took him to local locations first and then abroad in the various Italian dioceses to fund-raise and to illustrate the purpose of the work over which he presided.

In 1925, with his appointment as Apostolic Visitor to Bulgaria, he began his diplomatic service of the Holy See, which lasted until 1952, and with it he noticed the problem of the unity of the Churches. It was during his Bulgarian experience that Roncalli had a vision of a less centralized and more articulate Church, based on the recognition of the importance of local realities. After his ordination in March 1925, he went to Sofia with the task of providing for the needs of the Catholic community in a country of Orthodox religion. The assignment of a few months turned into a ten-year stay, during which he made his first contact with the Orthodox Church, laid the foundation for the construction of a Apostolic Delegation and established friendly relations with the Government and the Bulgarian Royal Family, despite 'the incident of the Orthodox wedding of King Boris with Princess Giovanna of Savoy.

On November 27th,1934, he was appointed Apostolic Delegate to Turkey and Greece. He arrived in Istanbul in the middle of the process of secularization put in place by the government of Mustafa Kemal Ataturk, on the eve of World War II. Thanks to his touch and his ability, Roncalli, celebrating Mass in Turkish, managed to organize some official meetings with the Patriarch of Constantinople after centuries of separation with the Catholic Church. The years in Turkey were important for charity and marked by the ecumenical vision of Roncalli that strives to help those in need. Undertaking frequent travel in Greece, in 1941, with the deepening of the famine that tore the country apart, he asked the Vatican to intercede with the British, that were blocking ships loaded with grain from reaching the peninsula.

Unexpectedly, by decision of Pope Pius XII, Roncalli was promoted to the Nunciature in Paris, where he arrived December 30, 1944, while the provisional government asked for the dismissal of thirty bishops accused of collaborating with the Vichy government. Roncalli was able to limit the number of bishops deposed and gain the esteem of the diplomatic and political Parisian. He performed numerous visits to the dioceses of France, including Algeria.

In 1953, accepting the proposal to transfer to Venice, he arrived in March with the fresh appointment of cardinals decided during the last consistory, Pius XII. He completed his duties with great care and attention as Bishop and embarked on new pastoral initiatives, such as the project of bringing the faithful to the Holy Scripture.

On October 28th, 1958, the seventy-seventh Cardinal Roncalli succeeds Pius XII with the name John XXIII,  with the intention of making a "transition." It is clear from the strong human and priestly personality of Pope John XXIII that he cared to give an impression to his pastoral ministry, including increasing contact with the faithful through visits to parishes, hospitals and prisons.

On April 25th, 1959 in the Basilica of St. Paul, the Second Vatican Council was announced. Born from a personal decision of the Pope, it was the largest attempt to modernize the Church and bring it closer to society. At the opening of the Council, John XXIII stressed the need to "look at the present, to the new conditions and forms of life introduced into the modern world, which have opened new avenues to the Catholic Apostate." With the work of the session, the period of "institutional solitude" began in which Roncalli moved away from the more conservative and intransigent voices of the Church. The work of the Council concludes, however, with major changes not only in the liturgy but also in the "culture" of the Church which, for the first time, recognizes the existence of the principles of truth in other religions.

In the spring of 1963, he was awarded the "Balzan" award for his commitment to peace, strength and the fundamental theme of his papacy, as evidenced by the his Encyclicals Mater et Magistra (1961) and Pacem in Terris (1963) and his decisive intervention during the crisis of Cuba in the fall of 1962.

At the same time, the health of the Pope declined rapidly. On May 23, Ascension Day, John XXIII overlooking St. Peter's Square and gave his blessing for the last time. The world took it with deep sorrow when the news of his death arrived on the evening of June 3, 1963.

John XXIII was declared Blessed by Pope John Paul II on September 3rd, 2000. On July 5th, 2013, Francis Pope signed the decree for the canonization of John XXIII, which will take place April 27th, 2014, simultaneously with that of John Paul II.

On March 6th, 2014, a tree and a stone were dedicated to Angelo Giuseppe Roncalli at the Garden of the Righteous, Milan.