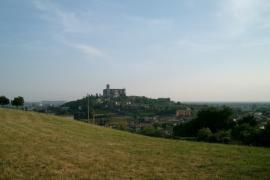 Testimony by Virginia and Margherita Salinas, daughters to one of the rescued people - Milan, February 2010

Giuseppe Salinas was born in Milan on 23 August 1930. In the Thirties he lived with his father Davide, street vendor, his mother Virginia and his sister Sara in Copernico street. At the beginning of August 1940 Davide Salinas was arrested by the fascist police on the charge of being a stateless Jew and taken to the prison of San Vittore. On 8 August he was moved to the concentration camp of Ferramonti di Tarsia (Cosenza) by train. Precisely one year later, in 1940, he was reached by his family. The Salinas were released for good behavior on 8 December 1941, but they were forced into compulsory residence in Calcinato, a village in the province of Brescia.

Life there went on quietly until 8 September 1943, when the armistice between Italy and the Anglo-American troops was signed. For the Jews the situation turned tragic. Angelo Tosi and his wife Teresa, peasants, went to the aid of the Salinas and the Sarfatis, evacuated to Calcinato. The Tosis became the protagonists of a heroic gesture of humanity and put their own lives to risk by hiding both families in the attic of their home in San Vincenzo street. The Sarfatis were four: the chief of the household, Samuele, his sister, Virginia, his wife Clara and their two daughters Susanna and Sara. The Tosis were a family composed of the married couple and their children Guerrino, fighting in Russia, Rosa, married with a little girl, and Maria and Agnese, who lived with their parents. The Salinas and the Sarfatis entered the attic on 17 November 1943. The eight persecuted remained there until 24 December 1944 when the situation became even more tragic. Those were the last months of the war. The Tosis were caught up in terror and did not feel anymore like running all the risks they had run by hiding the eight people, but they cared about finding a place for them at the Speranzinis', who had an abandoned barn outside the centre of the village, in the countryside. A neighbour of the Tosis, Mr. Parolini, offered to fetch the Salinas and the Sarfatis by cart and take them to the barn, on Christmas night of 1944.

There the two families spent the last four months of the war, in the terror of being discovered, until the fateful 25 April 1945.

The Tosi and Speranzini families accomplished such heroic acts completely selflessly and without even the hope of a reward, out of pure humanitarian spirit. It needs be said also that nearly all the inhabitants of Calcinato knew about their condition of clandestinity and no one reported them to the fascist police although a huge reward was provided.

At the end of the war, the Tosis received a certificate from the Jewish community of Milan, which was jealously kept by their granddaughter, Attilia Tosi, who still lives in the home of via San Vincenzo. Our dear Dad Giuseppe, who passed away on 3 February 2009, really wanted Angelo and Teresa Tosi and perhaps also Mr. and Mrs. Speranzini to be recognized as Righteous.