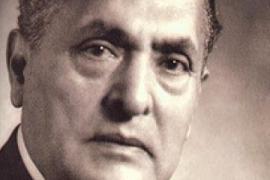 Gilberto Bosques Saldívar was born on 20 July 1892 in Villa de Chiautla de Tapia, in the state of Puebla. He studied at the State Normal School and, as a student, he took part in the Revolutionary Movement of 1910 led by Aquiles Serdán Alatriste.

At the end of the armed struggle, he took part in the Constituent Assembly of Puebla. His legislative commitment in favor of workers is a key factor in obtaining the inclusion of the social rights in the Constitutional Law of Puebla. From 1922-23 and 1934-37 he represented Puebla as Fedeal Member of Mexico’s Parliament. He founded the left wing of the National Revolutionary Bloc and in 1937 he was editor of newspaper ”The National”. This time was among the most eventful ones in the life of the government paper. Bosques quit politics to devote himself to the Mexican Diplomatic Corps. The then President of Mexico, Lázaro Cárdenas, appointed him Consul General to France in the years of Nazi occupation.

From 1939 to 1943 Bosques accomplished his diplomatic mission for the collaborationist government of Marshall Pétain in the Harbour of Marseille, and from here he encouraged numerous Jews, leaders of the French and Austrian Resistance movements, Spanish republicans and other persecuted to flee to Mexico. In 1943 the Nazi army interrupted his work and confined him and his family in Bad Godesberg for one year, blatantly violating the International Conventions on the treatment of diplomats in times of war. An agreement between the Mexican government and the crumbling Reich allowed him to go back to Mexico just before the end of the war. In 1944 Bosques, author of a broad literary work, wrote in one of his countless articles: “I followed the policy of my country bu helping, offering material and moral support to the heroic defenders of the Spanish Republic, the brave champions of the struggle against Hitler, Mussolini, Franco, Petain and Laval.”

Later on, Bosques worked as Ambassador of Mexico in Portugal, Finland, Sweden and Cuba, where he lived during the time of the fall of Fulgencio Batista and the rise of Fidel Castro. As an ambassador he turned his desire of freedom inherited by his ancestors into reality. His strenuous and fruitful work of aid to humanity made it possible for him to achieve a lot of international merits. The people of Puebla paid him a well-deserved tribute by carving his name in the walls of the Congress of the State of Puebla.

In a letter sent to Bosques of 23 March 1941, dr. Alfred Kantorowicz, an extremely grateful Jewish survivor, wrote: "I am glad to announce that tomorrow we are leaving for Mexico, via Martinica. I cannot leave Marseille without repeating the sincerest thanks from me and my wife, for all you have done for us. If we can leave, it is thanks to your protection and your help”.

Since 4 June 2003, a street in Vienna has been dedicated to Gilberto Bosques thanks to the joint efforts by the city authorities, the Mexican embassy to Austria and the Raoul Wallenberg Foundation. Gilberto Bosques died 1995 aged 103.