the police officer in Fiume who helped several Jews 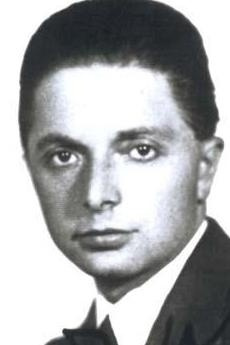 Following is the biography of Giovanni Palatucci updated since after the publication of the research paper by the Primo Levi Center of New York, which has recently questioned several passages in the story of the Fiume police officer, first of all the rescue of 5,000 Jews.
Since the publication in the Corriere della Sera of Alessandra Farkas' article about this paper, a debate unfolded that involved Gabriele Nissim, Gariwo Chairman, Matteo Luigi Napolitano, professor at the Università Marconi in Roma, Natalia Indrimi of New York's Primo Levi Center, historian Anna Foa and other influential voices.
After the argument sparked by the paper of the Primo Levi Center, the New York Times defined Palatucci as a "collaborator" of the Nazis in Fiume, Yad Vashem and the Vatican started reexamining their own documents, while Anna Foa and the Corriere della Sera recalled the presence of some pieces of testimony of the real rescues of Jews performed by Palatucci.

In December 2013 a research group was set up to analyze the story of the Fiume Chief of Police in Fiume. The closing statement of this commission establishes that no conclusion was reached: it will be up to each member (Mauro Canali, Matteo Luigi Napolitano, Marcello Pezzetti, Liliana Picciotto, Micaela Procaccia, Michele Sarfatti, Susan Zuccotti) to express his/her own view.

In the Further Insight box there are some articles about this story of the police officer in Fiume.

Giovanni Palatucci was born in Montella, in the province of Avellino, on 31May 1909.
In 1932, at the age of twenty-three, he graduated in law from Turin University and in 1936 he joined the police force as a volunteer and became Deputy Police Commissar in Genoa. At the end of 1937 he was sent to manage the police headquarters in the Adriatic seaport of Fiume. He later became Commissar and then Chief of Police regent in the department of foreign nationals, where he witnessed first hand the harsh reality of life for the Jews. When the Ministry decided, in April 1939, to transfer Palatucci to Caserta in the south of Italy, he refused to leave Fiume.
Rodolfo Grani, a Fiume Jew who knew Palatucci personally, recalls him as an “upright young Catholic” and mentions his first major attempt to rescue Jews in March 1939. Eight hundred fugitives were due to be handed over to the Gestapo within a matter of hours. Palatucci immediately warned Grani, who managed to persuade Bishop Isidoro Sain to offer the fugitives temporary shelter and protection in the nearby village of Abbazia.
On 13 September 1944 Palatucci was arrested by lieutenant colonel Kappler of the SS and taken to prison in Trieste. From there, on 22 October, he was transferred to the extermination camp at Dachau, where he died on 10 February 1945, just a few days before the Liberation, in his 36th year.
In 1990 the Yad Vashem in Jerusalem acknowledged him as a “Righteous among the Nations” and in 1995 the Italian State awarded him the Medaglia d'Oro al Merito Civile.
On 21 March 2000 the Vicariate of Rome issued an edict to start proceedings for the beatification of the “Servant of God Giovanni Palatucci”, which were successfully concluded on 9 October 2002. In addition, at the ecumenical Jubilee ceremony on 7 May 2000, pope John Paul II numbered him among the martyrs of the 20th century.
Dedications to Giovanni Palatucci include: the Brindisi Police Headquarters, the main municipal park in Nettuno, in the province of Rome, a street and the local branch of the National Police Association in Caggiano, a square in the centre of Padua, opposite the police station, and a street in Montelupone, dedicated on 27 January 2007, International Holocaust Remembrance Day.
We owe the discovery of the Fiume Police Chief to Georges de Canino, who found a biographical profile of him written by the scholar Goffredo Raimo, and then elaborated it by following up the little information available with eye-witness accounts and documents.

Following a controversy arisen in the media in 2013 after the publication in the New York Times of some critical statements about Palatucci from the Primo Levi Center, Yad Vashem set up an inquiry and concluded in 2014, in the words of Prof. David Cassuto, that "there is no real nor alleged news that may ever justify the review of the recognition of Giovanni Palatucci as Rigtheous among the nations that was bestowed on him on 12 September 1990".