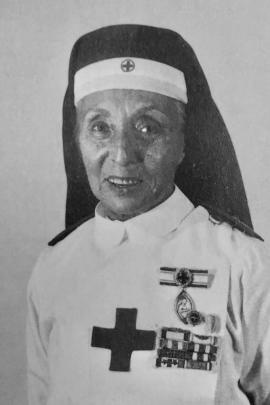 Maria Vittoria Zeme, who was born in Pallanza (currently Verbania, where a street has been dedicated to her), was a Red Cross volunteer during the Second World War in Grecia e Croatia.

After the Italian Armistice, Zeme has been deported (as military internee together with some soldiers who refused to join the Republic of Salò), in the nazi lager of Zeithain (also called 'Lazzarett'), where the Italian invalid soldiers were sent from the field hospitals in the Balkans and from the other lagers. Maria Vittoria, volunteer first as a life choice and then during her detention in the lager, decided to not leave her soldiers, applying to the letter the motto of the red cross nuns "Love, work, save".

She suffered from the same privations as his patients, the starvation, the cold, the lack of health-care benefits (some of her teeth have been forcibly pulled out by means of a carpentry pince and with no anesthesia) and of proper conditions of hygiene.

Covered only with her nurse's uniform, which was obviously inappropriate for the rigid clime, she has never given up to provide his patients for consolation and support, until she got sick too due to the terrible detention's conditions. Maria Vittoria took care of them in the harshest moment, even when there was no more hope. Despite the several physics and psychological violences suffered, she has always refused to join the Reich and the Republic of Salò.

While interned, Zeme wrote a Diary - necessarily lean, as it was severely forbidden to have one of them - which constitutes a real and genuine historical document on her experience of an absolute and inhuman evil. In this desperate context, Maria Vittoria did all she can do to do good, continuing her humanitarian mission that brought her there.

Maria Vittoria renewed every day her choice during her time in the lager, and even after the end of war she proudly claimed: "I do not consider the price of my choice. However, I have the peaceful certainty I have fulfilled a duty to which I was educated and committed, coherently with my religious faith and my humanitarian vocation of red cross volunteer nurse".

She has been returned home in June 1944. In 1994, she relied her memories to the book "The time in Zeithain, 1943-1944", where she refers to the diary she had written in the lager, with the intent to preserve the truth of the events.

Maria Vittoria Zeme is honoured in the Garden of Castelbuono.