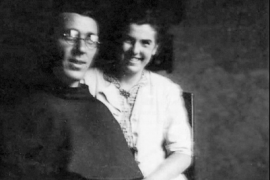 Mazovec Majda was a Slovenian student from Lubjana, who was studying medicine in Padua (Italy). After having visited the Chisanuova Camp, where she was looking for a cousin, Majda started collaborating with Father Placido Cortese and the FraMa Resistance movement during the years of the Nazi-fascist occupation of Northern Italy. After the Armistice, she risked her life by operating as a courier between Lubjana and Padua to transport documents, letters, food and clothing that were useful for the clandestine organization to rescue Jews, refugees, victims of political and military persecution. At the end of the war, after graduating in medicine, she returned to his country, where she became a highly esteemed cardiologist.

Reported by Elena Blancato. Proposal submitted for Monte Stella in 2015.