he dedicated his life helping those in need, saving the Sonnino-Shapira Jewish family from persecution 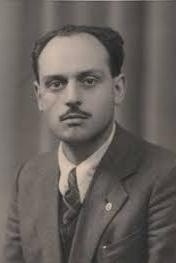 Carlo Bianchi was an Italian engineer and anti-fascist, Bronze Medal for Military Valour and Gold Medal of the City of Milan.
Born in Milan on March 22, 1912,  from a family of entrepreneurs, married with three children, he was murdered before seeing the fourth child born.

Life was intended by him as a mission to be fulfilled, as currency to spend, more than for the benefit of himself, for his suffering brothers, for the cause of justice and charity.
More than for his pain, he tortured himself for the pain of others, and taught everyone that one must be able to bear and resist.

He began his studies at the Collegio S.Carlo, completing it until the third classical high school, when he enrolled in the faculty of engineering at the Royal School of Engineering (later Polytechnic). At the same time he joined the FUCI (Catholic University Federation), attending national and regional congresses.
In October 1935 he graduated in Electrical and Industrial Engineering and the following year he joined the Carlo Erba Electrical Engineering Foundation as a researcher, remaining there until the eve of the war. In December 1943 he was the founder of the "Card. Schuster Medical and Legal Assistance Center" formerly "Charity of the Archbishop", still operating, first among the medical care centers for the poor in Milan. In the same period he was active, among other things, with Monsignor Andrea Ghetti in OSCAR (Wanted Anti-fascist Catholic Rescue Organization): by providing the printing house connected to his father's paper industry for the printing of fake leaflets, letters and documents that were delivered to persecuted politicians and to all those who needed them to expatriate. Among these, the Jewish family Sonnino-Shapira, who - thanks to him - was able to expatriate, as testified by Paola Sonnino, niece of Mrs. Berta Shapira.

He was the animator of the underground newspaper "The Rebel" with Mons. Giovanni Barbareschi, until his arrest for delation on April 27. He was first transferred to San Vittore, where he organized the first moral and material assistance centers for political prisoners, and then deported to the Fossoli Concentration Camp, near Carpi, where, on 12 July 1944, he was shot with 66 other political internees. The bodies of the 67 dead, buried in a mass grave, were then exhumed at the end of the war and brought back to Milan, where, on 24 May 1945, in the Cathedral, solemn funeral proceedings were held.