how Assisi protected the Jews 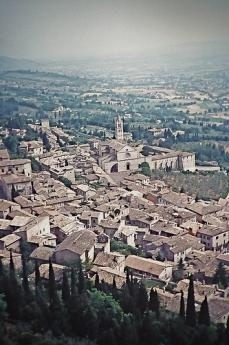 La società delle mandorle. Come Assisi salvò i suoi ebrei a collection of first-hand reports about the protection of Jews in Assisi. Brought to our attention by the writer Paolo Mirti, February 2007

“Those of us who found refuge in Assisi will never forget the efforts made to save us. Because in the mass extermination of six million European Jews, in Assisi not one of us came to any harm”.
Thus Professor Emilio Viterbi of Padua University recounted his experience as a Jewish refugee in Assisi. He was just one of the many Jews that found protection there, as from the autumn of 1943, blending in with the hundreds of other evacuees seeking shelter in the city of Saint Francis.

An effective underground organization was set up to help the Jews, coordinated by the bishop Monsignor Giuseppe Placido Nicolini and by a young priest named Don Aldo Brunacci. This network included Father Rufino Niccacci, guardian of S. Damiano, Father Michele Todde of the Sacro Convento and a local printer, Luigi Brizi and his son Trento.

The safest shelters were the convents of the enclosed nuns: those of the Clarisse, German Cappuccine, Stigmatine and Collective orders, as well as the Benedictine nuns of S. Apollinare.
The protection of the Jews in Assisi is described by Paolo Mirti in his book La Società delle Mandorle. Come Assisi salvò i suoi ebrei, based on eye-witness accounts and hitherto unpublished documents, including that of the canon Don Aldo Brunacci, who was awarded the honour of Cavaliere di Gran Croce by President Ciampi for his efforts to save Jewish refugees in Assisi; his deeds also earned him the title of "Righteous among the Nations ", assigned by the Yad Vashem commission in Jerusalem. The other members of the underground network involved in these rescue operations were also nominated "Righteous among the Nations ".

The title of the book, La società delle mandorle, refers to the “ societas amandolarum” documented in Assisi in the 1300s and operating in Piazza Del Comune, run jointly by a Jew and a Roman Catholic. This society was taken as a symbol of the peaceful coexistence of the two communities that marked the history of Assisi at a particular stage in its history. The author, who is by profession a senior civil servant, also writes for various daily newspapers and periodicals, as well as for the theatre.
In Italy, the general public is mostly unaware of how the Jews were saved in Assisi, whereas the subject is common knowledge to the Jewish community in the United States, thanks to Alexander Ramati’s novel Assisi Underground and to the resulting 1985 film, starring, among others Ben Cross and James Mason.

Gardens that honour The city of Assisi

The city of Assisi is honoured in the Garden of Solaro - Groane Park.

You can find a tree also in the Virtual Garden Other Stories.