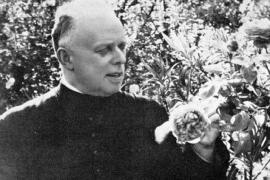 Parrish of Bozzolo during the Nazi occupation of Northern Italy, after the Armistice Father Primo Mazzolari got in touch with the Resistance movement. In those years, he hid many Jews, scattered soldiers and victims of political persecutions, helping them to expatriate in Switzerland.

Father Primo was an important referent for the entire population against abuses and Nazi-fascist violence. Arrested in 1944 by the German Command in Mantua, he has been released thanks to the intervention of the Curia. Subsequently, he lived undercover until the liberation of Italy in 1945.

In the post-war period, Father Primo was a supporter of dialogue and openness to other secular and moderate members of the society. For this reason, he has been opposed by many members of the ecclesiastical apparatus until Cardinal Montini and Pope John XXIII rehabilitated his name shortly before his death.

Reported by Oskar Tanzer. Proposal submitted for Monte Stella in 2016.

Father Primo Mazzolari is honoured in the Gardens of Casaloldo e Castelbuono.