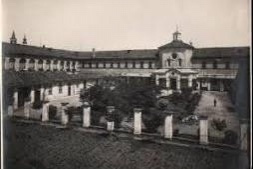 Carlo Tagliabue was the director of the Golgi Geriatric Institute (then Pia Casa degli Incurabili) in Abbiategrasso. Despite his initial adherence to Fascism, in the last year of the Second World War, when he saw the horrible crimes of Nazi-Fascism, he became a rebel and challenged the police with his own serious personal risk, hiding in the women's ward of the structure about thirty Jewish women, who thus escaped the Nazi-Fascist persecution. To confuse them with the patients, he gave them the uniform of the guests of the Pia Casa; he hid them, and fed them, carefully watching over their safety.

Only he, the chaplain Don Filippo Carminati, a couple of nuns, and the doctor knew the refuge of Jewish women at the Pia Casa and sometimes went to visit them to tell them the news that was transmitted by foreign radio, trying to instill confidence and hope in their souls.