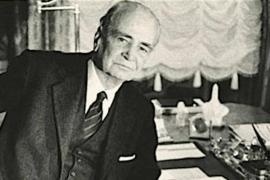 Raffaele Mattioli was born on 20 March 1895 in Vasto (CH). After attending the Commercial College “Ferdinando Galiani” in Chieti, in 1912 he enrolled at the University of Genoa, and after the outbreak of World War I, he enlisted in the infantry as a volunteer. After the end of the conflict, he served in the political-military office of the inter-allied occupation force in Fiume and then he joined the legions led by Gabriele D’Annunzio, for whom he worked as a press officer attending officials, journalists and intellectuals. After retiring from the army in January 1920, Mattioli married in Trieste Emilia Tami, who would prematurely die in 1923, with whom he had his first son, Giuliano. In the meanwhile, he got back to the college, graduating in Monetary Economics. In 1922 he became the secretary general of the Chamber of Commerce in Milan and he held Economics courses at the Bocconi University there. Three years later, Mattioli entered the Banca Commerciale Italiana as the head of the cabinet of the secretariat of Giuseppe Toeplitz, the Chief Executive Officer. The hiring marked a significant change in the life of Mattioli, who in the meanwhile married his second wife Lucia Monti, from whom he would have three children.

During the fascist regime, he co-founded the magazine La Fiera letteraria, run by Umberto Fracchia, and he sponsored, from 1929 to 1933, La Cultura, a monthly publication of compared literature founded by Cesare De Lollis. The determinant action of support to the periodical was known only to a close circle of coworkers, out of political caution and for the need not to involve the Chamber of Commerce in any possible way. On 25 March 1933, he was appointed CEO of Comit, together with Michelangelo Facconi. In April he joined the Fascist National Party, although he had always been a convinced antifascist. During his administration, the research bureau of the Comit, assigned to Antonello Gerbi, hired by Mattioli himself, became a kind of a “secret” university of the secular and antifascist leading class. In September 1938, Gerbi, although he had no more joined the Jewish Community, was moved by Mattioli – who had understood the risk he was running – to a subsidiary of the Banca Commerciale in Lima, in order to help him escape the anti-Jewish legislation. Obtaining the Peruvian visa for Gerbu, though, was no easy task. Mattioli, in facts, had to put far more pressure than he had thought. After over one month, the visa arrived and Gerbi could catch a flight for New York, where he studied for some week at the Public Library, to then reach Lima on 17 November of the same year. In the meanwhile, in Italy, the situation was sharply worsening. On 5 January 1939, the Laws for the defence of the race were passed, imposing a series of prohibitions on the Jewish Italian citizens, including those on the bank administrations to have Jewish employees. The action of Mattioli to the rescue of Gerbi thus, was not devoid of risks, as a more thorough control of the fascist authorities might lead them to discover theexpediency. But Mattioli did not care about this. And he did everything he could to help his other Jewish co-workers in different ways (the Historical Archive of Intesa Sanpaolo is rich at such pieces of testimony. We remember some names including those of Paolo Appel, Edith Frank, Guido Schwarz and Alfredo Zeller).

After 8 September 1943, Mattioli moved to Rome keeping reserved contacts with the Resistance leaders. Here, as it had already happened before, countless refugees found help and shelter tanks to Mattioli, in Nozzole and in several different places. In the most difficult time of the German occupation, Comit cooperated with the solidarity action network set up between the Vatican, the Red Cross and Switzerland. On 10 April 1946, Raffaele Mattioli together with Enrico Cuccia established Mediobanca, in order to meet the medium-time requirements of the productive companies, thus establishing a direct link between the market of savings and the financial needs for the production recovery of the enterprises – which had undergone the ravaging of the war that had just ended.

In 1947, Mattioli, together with Benedetto Croce, inaugurated the Istituto italiano per gli studi storici (Italian Institute for Historical Research), of which he took up the Presidency in 1952 until one year before his death, occurred in Rome on 27 July 1973.