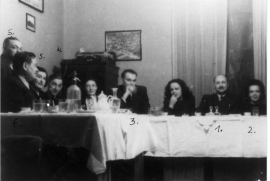 Franco Sopianac with some Jews he saved

The Sopianac family, owner of the Olex oil refinery, in 1941, after the enactment of the anti-Jewish laws, used the premises of their company located near Zagreb, in Sveta Klara, to hide Jewish workers. In a short time, family members transformed the building into a hiding place for employees and their families.

Some time later, the Nazis ordered the Sopianac family to reopen the refinery for military purposes. Franjo Sopianac, the father of the family, made the authorities to believe that all the men and women in the refinery were essential workers. He was thus able to acquire work permits for them.

Franjo's son, Ivan Sopianac, and his wife, Lela Sopianac, at the risk of their lives took care of the Jewish elderly and children, who could not work, hiding them in the factory or in their own home. They prepared their meals and took care of their basic needs. Lela also obtained several travel permits which allowed some Jews to flee to the area occupied by the Italians.

The Sopianac family helped many Jewish families during the war. One of them was the family of Nada Aser, an administrative employee of the factory. Her elderly mother was in fact hidden in a local hospital, paid for by the Sopianacs. Ivan brought her food and clothing several times a week. The Radičević family also received help from the Sopianacs. Miroslav Radičević worked at Olex as plant manager since 1942. His wife and son were hidden by the priest Dragutin Jesih and fled, with the help of some villagers, to the Sopianac factory.

Gardens that honour The Sopianac family