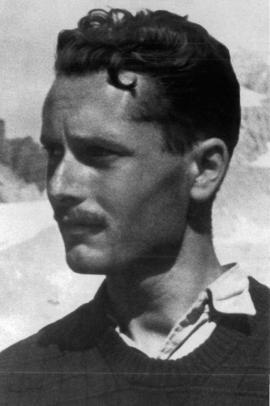 Ettore Castiglioni was a member of the interwar Milanese upper class, a multi-faceted personality, with a degree in Law, but a neat partiality for music and literature, at ease in the welcoming European museums, finding the high mountains more convenient and suitable for him, up to becoming one of the most gifted alpinists of his time. A figure, who must also have had a strong inclination to introspection and freedom of thought.

His deeds are told in his diary, whose most interesting part is that written in the last months of his life, from 8 September 1943 to 12 March 1944, day of his tragic death. Over those six months, Castiglioni devoted himself to the rescue of the victims of fascism, including famous people who have either cooperated with or were helped by him, including Luigi Einaudi, Federico Chabod, and Maria José from Savoia. Those were the nefarious times of the Republic of Salò.

But the most important names of his aides are names of the unknown people who formed with him a “rescue lab” that relied on stronger and stronger “solidarity bonds”, like a small “republic” where everyone played his role. They were his alumni of the military training of alpinism, that after 8 September formed with him a partisan group placed under his command.
Their key activity was humanitarian, rather than military. In his diary, Castiglioni wrote his aim in life was to bring freedom the people.

He headed small groups of refugees escaping from Valpelline to Switzerland, and he did so just because he did not accept injustice. One day he was jailed by the Swiss guards, and after his release, he was prohibited to enter Switzerland again.

He had to admit bitterly that his small republic had dissolved. At this point first he tried to use his home in Milan as a reference point for the Resistance, then he tried to reach Switzerland again notwithstanding the prohibition. We do not know from his diary why he made this decision, maybe because writing down the Resistance activities could have exposed the partisans to harsh consequences. Maybe he crossed the Swiss borders to meet with some antifascist exiles. The last witness to his activities, Oscar Braendli, said he was aware that Castiglione was on a mission on behalf of the National Liberation Committed. At any rate in March 1944 Castiglione was captured by the Swiss guards in a hostel little far from the border. He tried to flee and was found dead three months later near the Forno mountain pass. His death is still a mystery. No one does know exactly the reason why he made the decision that cost his life.

Ettore Castiglioni is honoured in the Gardens of Castelbuono e Solaro - Groane Park.