she saved Jews, with courage and disinterest, by helping them to expatriate to Switzerland 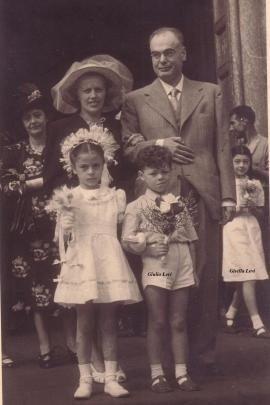 with Giulio and Gisella Levi

Between 1943 and 1945, in Milan, Nilde Simonazzi, secretary of an important Israeli lawyer from Milan (Anselmo Levi), intelligently, courageously and with absolute disinterest, saved Jews - her acquaintances or even strangers - by helping them to expatriate to Switzerland and favouring them in other ways.

She had been assigned by the "Housing Station" some rooms adjacent to the law firm that she used as a meeting place for political or racial persecuted people. In contact with smugglers from the Varese and Comasco area, she encouraged Jewish clients of the law firm and others in need to flee to Switzerland, sometimes accompanying them personally for a stretch towards the border. Many Jews passing through or coming from other cities found refuge, comfort and sometimes economic help in her house. At great personal risk, she then made some trips to Florence and Parma to bring help, acting as an intermediary between the members of separate families and without news of each other. She went to Parma to pick up the sons of the lawyer Anselmo Levi, Gisella and Giulio, and,  by passing herself off as their mother, accompanied them to the Swiss border where they could meet their parents. In the last months of the German occupation, Nilde was arrested after a search in the law firm but managed to save herself thanks to her presence of mind.

She put her life at risk in order to help those in need, with great generosity and courage.

She received from Yad Vashem the recognition of "Righteous Among Nations". Gisella Levi Caroti was also present at the ceremony.