the Schindler of the seas, who saved 1500 Jews on board of his ship Esperia 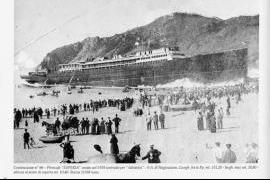 This tale was told the British press by a passenger of the ship, James Hazan. On 10 February 2004 an article was published in the Corriere della Sera under the signature of Alessio Altichieri

In June 1940, while the ship Esperia was about landing in Alexandria of Egypt, commander Stagnaro received a telegram from his superiors in Italy who ordered him to come back to Italy bringing back his passengers: Italy had entered the war and Alexandria was under the control of the British, now enemies. But on board there were 1,500 Jewish refugees coming from Nazi-occupied Europe, who had left Naples for rescue. The commander talked with Itzhak Hazan, Egyptian diplomat of Jewish decent, collaborator of the British secret service and a great friend of his, who was on board with his family. With another Egyptian, Cesar Douek, and a few trusted men of the crew (the telegraphist and the engineer) they decided to land, upon suggestion of the British intelligence service, in Mex, a small harbour still under Egyptian control, to disembark all Jews and go back to Naples avoiding being captured by the Britons. Stagnaro hence got back to Italy without those passengers, pretending he had received the telegram too late, after leaving the Jews on the land. His version appeared credible and Stagnaro went on commanding his ship without any consequences. With his stratagem he had managed to save all 1500 Jews embarked in Naples.

Esperia was torpedoed by the Britons one year later, but the commander saved himself. Yet he died in 1942 on another ship, while transporting a contingent of Alpine troopers to the front.

James Hazan was then 7 years old: the son to Itzhak Hazan, he was on the Esperia with his family.

In March 2004 Emanuele Stagnaro was commemorated in Sestri Levante, where an olive tree was planted in his memory.

Emanuele Stagnaro is honoured in the Garden of Maccarese - "Leonardo da Vinci" Institute.