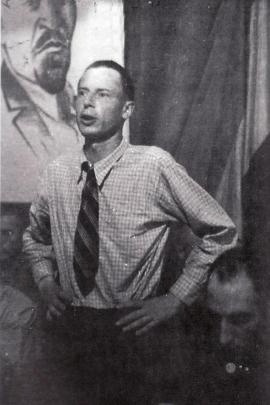 Anti-fascist since the '30s, Giuliano Pajetta was still very young when he enrolled in the Communist Party and was forced to emigrate to France. After having participated as a volunteer in the Spanish war alongside the Republicans, he took part in the clandestine fight against Nazi-fascism, shuttling between France and Italy.

Pajetta soon became one of the leaders of the Resistance. Repeatedly captured and evaded, in October 1944 was stopped by the SS, who did not recognize him. Deported first to Bolzano and then to Mauthausen, he took part to the resistance inside the camp and helped his companions in difficulty. He even refrained from get on a Red Cross ambulance, which would have brought him to safety during an exchange of prisoners, leaving his place to a pregnant girl, Augusta Romegialli, victim of a rape, whose child would have been surely killed by the SS guards in the camp.

After the liberation of Mauthausen in May 1945, Giuliano Pajetta came back in Italy, where he participated to the Constituent Assembly and served as a leader and parliamentary of the Communist Party. He wrote also several books in English, including Mauthausen - a book on his experience of the lager - in order to leave a memory to young generations.

Augusta Romegialli survived and gave birth to a child, Maria Rosa, who managed to reunite with the other children of the mother and to rebuild the incredible story of her salvation. The story has been confirmed by the testimony of Teresa Mattei, who was working with him in the Constituent Assembly.

The candidacy of Giuliano Pajetta for Monte Stella was proposed by Maria Rosa's sister.