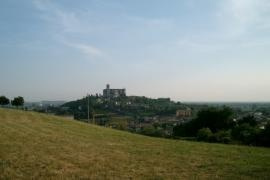 Testimony of Virginia and Margherita Salinas, daughters of one of the rescued - Milan, February 2010

Giuseppe Salinas was born in Milan on 23 August 1930. In the 1930s he lived with his father Davide, a traveling merchant, his mother Virginia and his sister Sara in via Copernico. In early August 1940, Davide Salinas was arrested by the fascist police, accused of being a stateless Jew and taken to the San Vittore prison. On 8 August he was transferred to the concentration camp of Ferramonti di Tarsia (Cosenza) by train. Exactly one year later, in 1940, he was joined by his family. The Salinas were released for good behavior on December 8, 1941, but forced to the forced domicile in Calcinato, a town in the province of Brescia.

Life lived there quiet until September 8, 1943, when the armistice between Italy and the Anglo-American troops was signed. For the Jews, the situation became dramatic. Angelo Tosi and his wife Teresa, peasants, met the Salinas and the Sarfati family, displaced in Calcinato. The Tosi became protagonists of a heroic act of humanity and endangered their lives by hiding the two families in the attic of their home in via San Vincenzo. The Sarfati were in four: the head of the family, Samuele, his sister, Virginia, his wife Clara and the two daughters, Susanna and Sara. The Tosi family was composed of spouses and sons Guerrino, military in Russia, Rosa, married and with a child, Maria and Agnese, who lived with their parents. The Salinas and Sarfati entered the attic on November 17, 1943. The eight persecuted remained there until December 24, 1944, when in the last months of the war the situation became more tragic: the Lords were taken by terror and they no longer felt the risk keeping the eight people hidden. However, the Tosi worried about finding accommodation for them by the Speranzini lords, who owned an abandoned stable outside the village center, in open countryside. A neighbor of the Tosi, Mr. Parolini, offered to come and take the Salinas and the Sarfati with a cart and taken them to the stable on Christmas night 1944.

There the two families spent the last four months of the war, in fear of being discovered, until the fateful 25 April 1945.

The Tosi and Speranzini families accomplished these heroic deeds without any economic interest, for pure humanitarian spirit. It should also be noted that almost all the inhabitants of Calcinato knew about the condition of clandestinity of the eight persecuted and none of them denounced them to the fascist police even though there was a large sum of money as a reward.

At the end of the war, the couple Tosi received a certificate from the Jewish Community of Milan jealously guarded by his niece, Attilia Tosi, who still lives in the house in via San Vincenzo. Our dear father Giuseppe, who died on 3 February 2009, wished so much that Angelo and Teresa Tosi and possibly also the Messrs Speranzini were recognized as Righteous.

Reported by the Salinas sisters, daughters of saved. Proposal submitted for Monte Stella in 2010

Angelo and Teresa Tosi are honoured in the Gardens of Castelbuono e Garden of Terni- Istituto Casagrande-Cesi.