the pastry chefs from Turin who hid a Jewish family 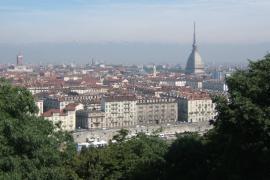 "A certain degree of luck, unconsciousness, altruism" other persons known and unknown, "but above all, the firm will to not be overwhelmed by events allowed me to write this brief note today and document the adventures of which I was a participant and that allowed us to get out of the tunnel of the Nazi genocide from '43 to '45. Having gone to Turin, as I sometimes did, to find gentlemen Vitali-Motta I knew for a relationship of simple friendship because i attended their pastry shop (where today is the Stock Exchange), where they had moved from their home in Pombal way to avoid the bombing.

I was looking for a place to hide me and mine, at least temporarily. I spoke with them. I remained indelibly impressed by the simplicity with which the story of my troubles, Mr. Vitali, his wife and the mother of the latter, I was graciously allowed to occupy their accommodations.

I must admit that at the moment, given the limited relationship that I had with them, it seemed to me a proposal is not feasible "for the risk they would encounter," given that the German ban condemned by arresting those who had given refuge to Jews .
Even today I present what I said Mr. Giuseppe Vitali: 'For a friend there can be no problems whatsoever'. In no particular order we have moved away from the place of displacement and we occupied housing via Pombal. We all lived in a big room, sleeping on mattresses on the ground that they collected from relatives and acquaintances.
We were trying to get noticed as little as possible and not down in the public shelter during the Allied bombing.

To the interest of the same Vitali-Motta and of their knowledge of a nun (Sisters of Providence - Institute 'Joan of Arc', via pomba 18, Turin), we were able to get all false identity cards by Mrs. Rich Secondina in Naretto Nas, owner dell'Anagrafe of Gassino Torinese.
I ran the greatest risk, two situations were contemporaneous negative against me: my Jewish origins and for age, with documents 'Aryan', which made me eligible for military service.

In that short period of stay in Turin , I could not move to the city with impunity where after years of study, sport and work I could be identified and reported.
Once in possession of false documents before I decided with my wife and child to reach Rome with my uncle and his family already displaced with us ... ".