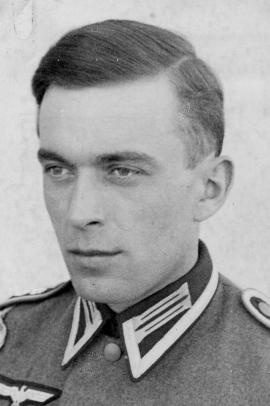 Gerhard Kurzbach was born in 1915 in Poznań. In 1918, he moved with his family to Bunzlau in the eastern part of Poland. He trained to be a mechanic and he worked in his father’s garage. In August 1939 he was enlisted in the Wehrmacht, where he served in the artillery. In 1941 he took up command of a military car fleet near Bochnia. Here, in the same year, a ghetto was set up, gathering all the Jews from the outskirts. Only in Bochnia they amounted to nearly 3,500, almost 20% of the city’s population. Many Jewish workers were employed in Kurzbach’s garage. In 1942, the sergeant rescued 300 of them from deportation to the death camps under the excuse of urgently needing them for a mission, which was key to the cause of war.

Yisrael Frumer, one of the 200 Jews saved by Kurzbach, told the Israeli daily Haaretz about the meeting he had with the sergeant on 23 August 1942: “Kurzbach arrived in the ghetto with a military truck and started summoning the people. He yelled at us. We were really scared of him. Only afterwards we understood that such cries were a short of an alibi. He pretended not to be a ‘friend of the Jews’, no one knew he used his uniform to rescue us.” Frumer spent the night in the garage, with part of his family. The gates were closed, so no one could enter. This way, the Jews summoned by the sergeant were saved from the deportations that were hitting the ghetto. The following day they all got back home.

Some months later, at the end of 1942, the Nazis settled the scores with Kurzbach. Frumer saw five armed men get close to the garage, disarm and arrest Kurzbach. His last message to the family was sent from Romania in August 1944. His whereabouts have remained unknown ever since then.

For his rescue activities during the Nazi tyranny, Gerhard was recognized a Righteous among the Nations on 28 November 2012.