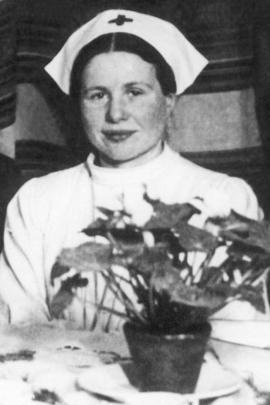 Irena Sendler was born in Varsavia in 1910. During the Holocaust she worked for Zegota, a unit within the Polish underground established specifically to help Jews in hiding.

As a health worker, she had access to the Warsaw Ghetto, and between 1942 and 1943 she led hundreds of Jewish children out of the Ghetto to safe hiding places. Some children, after being sedated, were carried out in potato sacks, others were placed in coffins, some entered a church in the Ghetto which had two entrances. One entrance opened into the Ghetto, the other opened into the "Aryan" side of Warsaw. They entered the church as Jews and exited as Christians. "`Can you guarantee they will live?' " Sendler later recalled the distraught parents asking. But she could only guarantee they would die if they stayed. "In my dreams," she said, "I still hear the cries when they left their parents."

Many of the children were sent to the Rodzina Marii (Family of Mary) Orphanage in Warsaw, and to religious institutions run by nuns in nearby Chomotow, and in Turkowice, near Lublin. The exact number of children saved by Sendler and her partners is unknown.

On 20 October 1943, Sendler was arrested. Though she was the only one who knew the names and addresses of the families sheltering the Jewish children, she withstood torture, refusing to betray either her associates or any of the Jewish children in hiding. She was sentenced to death and sent to the infamous Pawiak prison, but underground activists managed to bribe officials to release her. Her close encounter with death did not deter her from continuing her activity. After her release in February 1944, even though she knew that the authorities were keeping an eye on her, Sendler continued her underground activities.

She died in Varsavia in 2008. "A great person has died - a person with a great heart, with great organizational talents, a person who always stood on the side of the weak," Marek Edelman, the last surviving leader of the 1943 Warsaw Ghetto uprising, told TVN24 television.

In hopes of one day uniting the children with their families - most of whom perished in the Nazis' death camps - Sendler wrote the children's real names on slips of paper that she kept at home.

When German police came to arrest her in 1943, an assistant managed to hide the slips, which Sendler later buried in a jar under an apple tree in an associate's yard. Some 2,500 names were recorded. The children had known her only by her code name Jolanta.

Irena Sendler did not think of herself as a hero. She claimed no credit for her actions. "I could have done more," she said. "This regret will follow me to my death."

She lived according to her father's teachings, arguing that people can be only divided into good or bad; their race, religion, nationality don't matter.