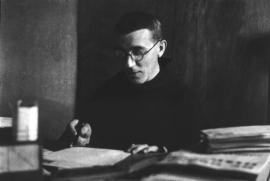 During the war, Placido Cortese was a priest in Padova and collaborated with the Resistance movement FraMa so to bring aid to Jews, refugees and soldiers of several nationalities. At first, Father Placido helped displaced people from Slovenia and Croati who were interned in the Chiesanuova Camp, created by the Fascists in June 1942. After the September 8, 1943, Father Placido started helping also the Italian soldiers (left without a guide after the Armistice) together with soldiers of other nationalities and Jewish refugees. In October 1944, Father Placido was caught by the SS and taken to Trieste, where he has been tortured until death. His body has been probably burned in the crematorium of the Risiera di San Sabba concentration camp.

After his death, Father Placido's brave actions have been honored by many. In 1946, General Alexander expressed his "gratitude for the help he gave to the members of the Allies' Armies". In 1948, the Czechoslovak President Edvard Beneš confer him "the Bronze Cross". In 1951, the City Council of Padova dedicated to him a street.

Reported by Elena Biancato. Proposal submitted for Monte Stella in 2015.