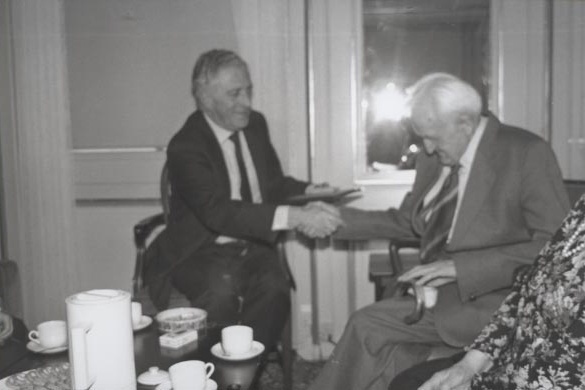 Before the outbreak of the war in 1939, Richard and Erna Hausmann, a Jewish couple, fled from Germany to Sweden, but as their residence permits could not be renewed, they decided to leave for Denmark, where they found work on farms in the south of Zealand. For a short time, Richard worked on Harald Petersen's farm, while his wife was hired on a neighboring farm, both in Kongsted parish. Then the Hausmann family found work in Haslev, where their son Herman was born.

In 1941 Harald and his wife Agnete moved to a farm in Ostbakkegaard, 15 km west of Copenhagen, and in 1942 the Hausmann couple were hired on Harald Petersen's farm as shepherds. On Sunday, September 30, 1943, Mr. Petersen learned of the Germans' plan to deport all Jews of Denmark to concentration camps, so the next morning he took the Hausman family to Copenhagen, where they went underground and remained in hiding with friends in Bronshoj, in the suburbs of the city. After many research, Harald found a group of fishermen in the port of Copenhagen willing to transport Jews to Sweden. During the night between 3 and 4 October 1943, the Hausmann family, together with a group of Jews were transported to Sweden by fishing boat. Harald, who had paid 3,000 crowns in advance on behalf of the Hausmanns for their transport to Sweden, stayed near the fishing net depot until the following day, and only left when the fishermen returned and reassured him that all Jews arrived in Sweden without problems.

In 1983, the Hausmann family visited the Petersens in Copenhagen, because they wanted to express their gratitude to them for the help they had received when they were forced to flee to Sweden.

On March 28, 1990, Yad Vashem bestowed the title "Righteous Among the Nations" upon Mr. Harald Petersen.