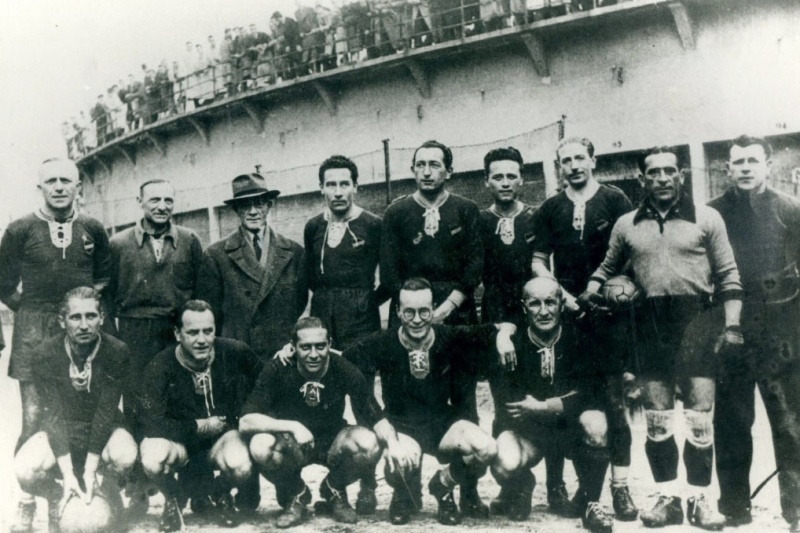 Ferdinando Valletti was born in Verona on April 5, 1921. After a childhood spent in a boarding school, he graduated from the Galileo Ferraris Institute. In 1938, he moved to Milan to work at the Alfa Romeo. Here, he started playing for the Seregno soccer team.

The Milan Football Club noticed him and included him in the team. But his dream as a footballer ends early: during a game he broke the meniscus. After the military service, he has been contacted by the Communist groups active in the factory, which included him in the organization of the strike of March 1, 1944 to Alfa Romeo. He adhered enthusiastically, happy to give his contribution to the liberation of the country.

They all worked hard for a month, distributing copies of Il Popolo e Italia Libera newspaper to the workers. The strike succeeded throughout northern Italy, the factories stopped producing and the Germans became ruthless. The same evening, Valletti was captured and, after spending a night in San Vittore, he was taken to platform 21 of the Central Station of Milan and sent with 22 companions of the Alfa Romeo to the Mauthausen concentration camp.

Throughout the imprisonment, the desire to finally meet his child took him alive (his wife was pregnant). Valletti was transferred to Gusen and here he met Professor Carpi, a great painter. The artist is older, his health conditions are very precarious, he is at the end of his strength. Valletti and Carpi became friends, and Valletti started protecting him. Fortunately, the SS soon discovered that Carpi was a great artis and decided to send him to the infirmary and made him painting for them.

One day, a kapò asked prisoners who knew how to play football. The SS must  dispute a game but a guard was missing, so they were looking for a substitute. Valletti did not hesitate, asking to play. The kapò took him before the camp commander, who explained him that he had to do a test first: if he was not able to pass it, he would have been eliminated. Valletti did not let himself be intimidated and tried everything for everything. Luckily, he passed the test.

Since then, Valletti played as a reserve for the SS team. He was transferred to work in the kitchen and this allowed him to help the four companions of the Alfa remained alive.

When, after some time, the Americans arrive, Valletti put his friend on a baby carriage, pushing him out of the fence to let him enjoy his freedom. They were also joined by Vignolle, Crippa and Nespoli, and all of them, in the grass, embrace each other. The five returned to Milan in August 1945, after being cured by the Americans. Finally, Valletti could know and embrace for the first time the daughter born during his absence. He never told his terrible story to the family.

Valletti was awarded with the Ambrogino d'oro by the Mayor of Milan, Aniasi. Moreover, he was also awarded with the diploma of Master of Work of the President of the Republic. He died on July 23, 2007.

Gariwo would like to thank Ms Manuela Valletti Ghezzi for the valuable material provided to the editorial staff.

Reported by Manuela Valletti Ghezzi , the daughter. Proposal submitted for Monte Stella in 2014