they hid and saved a Jewish family 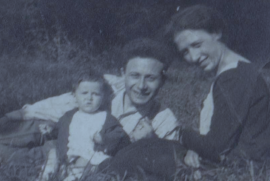 Valeria, with her parents Riccardo Ancona and Ester Foa in 1924

Between December 1943 and January 1944, in the municipality of Borgomanero (NO), Mr. Antonio De Regibus and Mrs. Margherita Colombo, with their daughter Fiorentina, hosted for about a month a Jewish family composed of parents, Riccardo Ancona and Ester Foa, and two daughters, Valeria and Roberta, originally from Alessandria and residing in Milan. In the De Regibus house, the family waited for the time to flee to Switzerland.

The two families were linked by the working relationship between Riccardo and Antonio. They met between the 1920s and 1930s and established a professional and friendly relationship, which continued even after the war, until Antonio's death in 1957.

With the start of the deportations of Italian Jews in the second half of September 1943, Riccardo had to flee from Milan with his family. Thus began for the Ancona family a dangerous race to Switzerland that lasted about 6 months. Starting from Lesa, they then passed through Coimo, Domodossola, Omegna-Granerolo and Borgomanero - the penultimate stage. At Borgomanero, under the protection of the De Regibus family, Riccardo was able to make contact with an expeditionary man from Chiasso who organised the passage to Switzerland.

The De Regibus family was made up of parents and two children, Fiorentina and Peppino. Peppino, the only male son, was victim of an ambush by Tito's partisans in February 1943. Initially considered missing, he was declared dead only at the end of the summer of 1943, bringing a heartbreaking pain to his parents. This pain, however, did not stop Antonio and Margherita's desire to do good, to help those in danger. The De Regibus family was very respected in Borgomanero, a medium-large town where everyone knew each other. No one in the village denounced the presence of Riccardo, Ester and their two daughters.

Fiorentina told her daughter Germana several times about when, between December 1943 and January 1944, she went for a walk with Valeria and Roberta. It was mainly under the protection of the De Regibus family that his father Riccardo was able to organize the escape towards the Swiss border. The flight took place on the night of 14 February 1944, with the help of the financier Salvatore Corrias, who was then killed by the Nazi-Fascists on 28 January 1945 - already recognised as a "Righteous Among the Nations".

The goodness and courage of the De Regibus family allowed the Ancona family to survive in a dark historical moment, when finding people you can trust was a very difficult challenge.