the entrepreneur who saved his workers in his brush factory 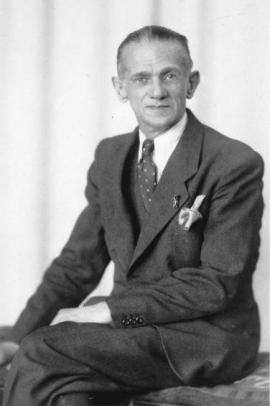 Otto Weidt, Righteous Among the Nations since 1971, was born in 1883. During and after WWI, he was exonerated for health reasons. He was a convinced pacifist, and he suffered from a sight disease. He had to leave his job as an upholsterer, and he created a company with blind workers that produced brushes and brooms for the army. His employees were almost all blind, deaf or mute Jews whom a Jewish nursing home near Berlin referred to him. When the deportations began, without any fear, he argued with Gestapo officials to save every single Jewish worker.

To this end, he resorted to bribery and argued forcefully that his company's production was essential for the needs of the army. He went to the Grosse Hamburger Strasse collection camp, where Berlin's Jews were massed before deportation, and got his blind employees released.

In addition to these disabled people, Otto Weidt also employed some healthy workers without enlisting them through the Jewish employment office as the Nazi laws designed to manage forced labor provided.

Through a mixture of bribery and subterfuge, Weidt managed to overcome the objections of the director of this office. Inge Deutschkron, now 94, is one of the healthy Jewish workers saved by Weidt. When she lived in hiding with her mother to escape deportation, Weidt obtained for her an Aryan work permit that he had acquired from a prostitute who did not know what to do with it for herself. Deutschkron is now the author of "They remained in the shadows", a literary monument to her savior.

Unfortunately, this document remained valid for only three months until the prostitute was arrested. One of Weidt's most daring moves was the rescue of Alice Licht, who in 1943 was discovered hiding with her parents in a factory's annex and deported first to Terezìn, then to Auschwitz, and then to Christianstadt (a sub-camp of Gross Rosen).

Otto Weidt went all the way to Poland to look for her in the camps. Licht told Yad Vashem that Weidt had made plans for her to escape, but they failed. When the Jews locked up in Christianstadt were led on a death march, Alice escaped and returned to Berlin. By then, her parents were dead, and Weidt's apartment had been destroyed in a bombing raid. Yet, he kept her hidden until the end of the conflict.

After the war, Weidt founded an orphanage for those who had lost their parents in concentration camps. He died in 1947.