housekeeper of the Segre family since the early 1900s, she was ready to take risks for all the members of the family and kept their objects until the war was over 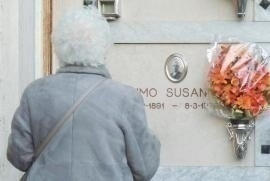 Susanna Aimo was born in Mondovì, in the province of Cuneo in 1981. She was a young, tenacious and rebellious girl, that decided to leave the small rural village of Gratteria for the big city of Milan in search of job. There, she began working as a housekeeper for the Segre family from the early years of the Twentieth Century.

A faithful and honest person, even after the promulgation of the racial laws in 1938, she chose to continue working in the service of the family, pretending to be a guest or a friend of the family. When the Segre family moved to Inverigo, Aimo went with them. She stayed very close to the Senator, in that time child, taking care of her during the years of the persecution against the Jews, protecting her, despite the fact that authorities had imposed a ban on talking and working with Jews.

Liliana's grandfather Giuseppe Segre, called Pippo, was ill with Parkinson's and needed continuous assistance. Susanna stayed with him and with Liliana grandmather's Olga Loevvy even when Liliana tried to flee to Switzerland with her father Alberto (Giuseppe and Olga could stay because they were "unable to harm the Reich").

The young Susanna forged a relationship of great affection with the whole family, so much so that she was ready to run dangers for every member of the Segre family. When they were deported to the extermination camp - in May 1944 Pippo and Olga were also captured after an informing and Susanna accompanied them to he van than took them away - she was left alone in Inverigo, she hid and kept their objects, living in the poverty and deprivation of the war, to then return to Liliana Segre after her return to Italy from imprisonment, after the war. She didn't even touch the food reserves in the house. Among the jewels and treasure kept, Susanna also saved the family's photo albums.

A fervent Catholic, she continued all her life to pray for the Dead of the Segre family as if they were her own. Died in 1975, Susanna Aimo is now buried in the Gratteria cemetery. The Municipality of Mondovì in November 2020 conferred public recognition on her memory.

Susanna Aimo is honoured in the Garden of Trevi.