presenting himself as spanish Ambassador in Hungary he saved 5218 Jews 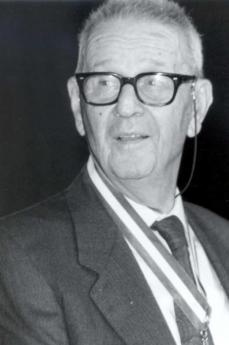 Giorgio Perlasca was born in Como on 31st January 1910. In the 20s he strongly sympathised with the fascists, particularly with the “dannunziana” and nationalist ideology. Afterwards, he left as a volunteer, first for East Africa and then Spain where he fought by the side of General Franco. On his return to Italy, at the end of the Spanish Civil War, he no longer supported Mussolini's choices of alliance with Germany and of the introduction of the racial laws in 1938. However, he never became an antifascist.

When the Second World War broke up, he was sent as an official delegate with the status of Diplomat to the East Curtain countries. At the time of the armistice between Italy and the alliance (8th September 1943) he was in Budapest: he refused to adhere to the Italian Social Republic and is therefore committed for some months in a castle reserved for diplomats.

In October 1944 the systematic persecution, violence and deportation of citizens of Jewish religion began. Perlasca managed to escape the controls on the committed diplomats and fled. He first hided with acquaintances, and then he found refuge in the Spanish Embassy. Here he began collaborating with Sanz Briz, the Spanish Ambassador had started issuing safe conduct passes to protect Hungarian Jews. At the end of November Sanz Briz had to leave Hungary so as not to recognize the Szalasi government. Perlasca presented himself as Brinz's substitute and he kept the Spanish Embassy going almost on his own, with risk of being discovered by the Nazis and pressed by the need of finding food for the Hungarian Jews crowded in his “protected houses” along the Danube. He succeeded in preventing their deportation until the red Army arrival, saving 5218 Jews.

He was made prisoner, then freed after some days, and he finally entered into Italy, where he started living a normal life. Being a very reserved man, he never revealed to anyone, not even his family, his story of courage, unselfishness and solidarity. Until in the Eighties some Hungarian Jewish women started searching the Spanish diplomat who had saved their lives during the Second World War. Through the Budapest Jew community newspaper, they found him in Padua. In this way, his story emerged from years of silence.

Giorgio Perlasca died on 15th August 1992. He is buried in the cemetery at Maserà, a few kilometers from Padua. He wished to be buried in the ground, with the words written in Jewish “Righteous Among Nations”.