one of the most charismatic representatives of the Bulgarian Orthodox Church 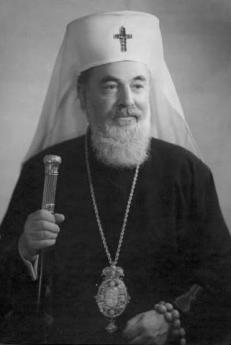 Metropolitan Stefan of Bulgaria was one of the most colourful and charismatic figures of the Bulgarian Orthodox Church and perhaps of the entire Christian institution of his era.

A tall, handsome man with a “salt and pepper” beard, a booming voice and a great sense of humour, he was considered “less saintly than all the other members of the Synod” of his Church. He was intellectually brilliant, well read and fiercely independent.

Born in the Rodopi mountains in 1878, he studied to become a teacher and in fact started to teach in his native village. Almost immediately, however, he opposed the authorities and was accused of rebellion against the State, at that time still under the Ottomans. Later he studied at the spiritual Academy in Kiev. On his return, instead of taking his orders, he surprised the Synod by enrolling in the Military Academy, where he was promoted lieutenant. He became a priest in 1910.

Four years later he took a stand against King Ferdinand’s alliance with Germany, defining this as a “fatal political decision”. To protect his young and rebellious subordinate, Exarch Joseph sent him to study in Switzerland, where he later graduated from Geneva University. He returned to Sofia after Ferdinand’s abdication.

His ecclesiastic career was rapid. Stefan soon became one of Sofia’s most eminent and controversial figures. An eloquent orator and a polyglot, the illustrious prelate was a fascinating man of the world. “He is the delight of the anti-clerical cartoonists” reported the newspapers. Numerous rumours circulated about his alleged love affairs and his impeccable turnout.
But Stefan’s outward frivolity did not obscure his great qualities as a man of the Church, respected and admired by his peers. He was profoundly religious and believed that the presence of God in the world was important and tangible.

When the Second World War broke out, Stefan became the declared enemy of the alliance with the Third Reich. “Only madmen – he wrote in his diary in April 1942 –can fall under the hysteria that has taken over this miserable Führer. What has happened to the great German civilization, if the people allow themselves be commanded by a crazed Führer? Is this culture not a deceptive façade of the barbarian fury of the Teutonic race?” Stefan lost no opportunity to express his criticism in articles that were frequently censured and led to alarming threats on the part of Fascists and Nazis. Arguing with a censor, he said: “It’s not true that I am anti German. I greatly admire numerous Germans, such as Stefan Zweig, Thomas Mann and Albert Wasserman”, deliberately selecting the names of illustrious German Jews.
In September 1942 he infuriated Fascist and Nazi circles by openly preaching against anti-Semitism. He publicly declared that the Bulgarians should consider the Jews as their brothers.

In 1943, as German anti-Semitism took hold all over Europe, Stefan worked to engage the whole Bulgarian Church in his opposition to Nazi policies and effectively gained the compact backing of both the Church hierarchy and the believers, who supported him wholeheartedly.
Plovdiv’s Metropolitan Cyril and Vidin’s venerable Neophyte, president of the Holy Synod, also strongly opposed the repressive measures adopted against the Jews. All the top-ranking prelates signed a formal protest to the king, also threatening to excommunicate him if he continued to approve of the Nazis’ cruel methods.

In an attempt to stop the deportation of Bulgarian Jews, Cyril went to the station and threatened to lie down on the railway track. In another famous episode, he unhesitatingly confronted the German guard barring his entrance to a school where Jews had been rounded up for departure, saying to them: “Wherever you go, I will come too”.

On 2 April 1943 the leaders of the Holy Synod of the Bulgarian Church met in Sofia to discuss the government’s pro-Nazi policies. Vidin’s Metropolitan Neophyte, who opened the proceedings, went straight to the point: “The Jews know only too well that nobody is speaking out authoritatively in their defence, but the voice of the Bulgarian Church, which can also speak much louder, will be heard … and if the Church does not intervene to defend these helpless wretches, then we can only expect more cruelty, for which our good-hearted people will one day feel ashamed, and from which they may even suffer further ruin”. The debate continued and Stefan then wound it up with these words: “When we ask the State authorities what the Jews of this country are guilty of, they have nothing to say. They have taken everything from the Jews, but when they tried to take their lives, the Jews asked the Church to defend them. We cannot refuse. They are being subjected to inhuman suffering”.

The authoritative intervention of the Church came on top of the decisive initiative of the deputy president of parliament, Dimitar Peshev, who first obtained the suspension of the trains leaving for Auschwitz and then, with a letter of protest signed by 42 deputies, the definitive cancellation of the deportation plans. Bulgaria’s 48 thousand Jews were safe. Only those of Thrace and Macedonia, under the iron grip of the Nazis, were not able to escape the tragic fate of the Holocaust.

In 1944 the Soviets entered Bulgaria. The Communist dictatorship began and the government came into conflict with the Church directed by Stefan, introducing civil marriage and trying to control the ecclesiastic hierarchy.
Stefan made his voice heard once again, and in 1951, the regime threatened to remove him from his post and deport numerous orthodox priests to the labour camps.

Stefan resigned in protest. He was to die in solitude in 1957, relegated to a small and remote monastery.

Metropolitan Stephan is honoured in the Garden of Yad Vashem.