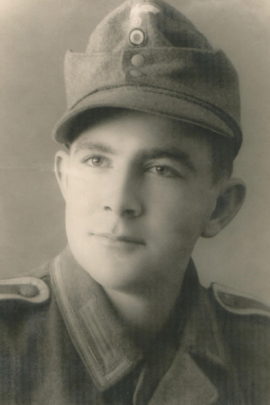 Erich Eder was born in Bavaria on April 5, 1924. At the age of twenty he was sent as Commanding Officer of the Wehrmacht on the Italia front in Mombaroccio (Pesaro). Here he became friends with Father Sante Raffaelli, a Franciscan friar guardian of the convent of Blessed Sante who hid fugitives - including several Jewish families.

Alfredo Sarano, secretary of the Jewish Community of Milan, also found refuge in the convent. He fled with his family after hiding the list of about 14 thousand Milanese Jews. When Erich Eder discovered the presence of the Jews, he decided to contravene the orders and told Father Sante Raffaelli that he would not arrest any Jews, thus saving from deportations not only the Sarano family but also all the Jews registered in the lists kept by Alfredo.

After the Allied bombing of the convent on 25 August 1944, Erich Eder returned, risking his life, to verify that the friars and the hidden civilians were well.

Moreover, during the war operations, he made a vow to Blessed Sante and left a letter to Father Sante Raffaelli in which he asked him to inform his family in the case of he died in battle. In the letter, he wrote to his mother that he had obeyed his conscience in war and followed the Christian values ​​she had taught him.

Until a few years ago, the Sarano family didn't know that the salvation of their beloved ones depended not only on the friar of the convent but also on the courageous choice of the young commander Eder.

At the end of the war, it was learned that the Eder family had also saved the Jewish Betty Greif from deportation, and probably other people as well, by not revealing where they were taking refuge.

During the years of persecution, Alfredo Sarano wrote a diary that he left to his three daughters as a spiritual inheritance. The relationship between Father Sante Raffaelli and Alfredo's family continued after the war in private form. In 2011, the journalist Roberto Mazzoli met the Sarano family in Israel (in 1969 Alfredo moved to Israel with the family, where he died on April 2 in 1990). There, the Sarano sisters decided to give the diary to Mazzoli, who was able to find Eder's son.

The story of the young Catholic Commander now is narrated in the book "We are here we are alive - the Diary of Alfredo Sarano and of the family who escaped the Shoah" by Roberto Mazzoli, published by San Paolo with a preface by Liliana Segre. The Senator recognized in Sarano's diary some people from Mombaraccio and Pesaro whom she met in the 1960s.