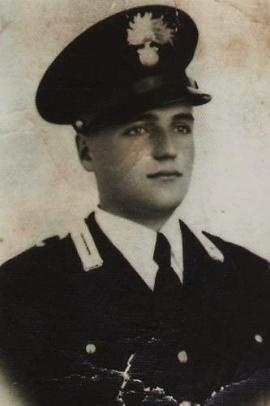 Badinelli was a young policemen of Allegrezze, a fraction of S. Stefano d'Aveto in the province of Genova. After September 8, 1943, the Barrack of S. Maria del Taro, where he was stationed, remained with no one in control and Badinelli came back home, working in the fields and seeking for his brother - who went missing in Russia.

In August 1944, the several clashes occurred between the partisans and the nazi-fascist put the nearby villages to fire and the sword. In order to contrast the attacks of the Resistance movement, the Commander of the Monte Rosa Division threatened to light S. Stefano d'Aveto up and to kill twenty hostages if the partisans did not show up to the Command. Since no one turned himself in, on the 2nd of September Albino - who was terrified that the twenty innocent hostages could have been slaughtered by the nazi-fascists - showed up to the Command invoking for moderation and peace. However, he has been immediately conducted before the firing squad near the Cemetery and killed. Before dying, Badinelli told to the priest he was willing to forgive his executioners.

Albino Badinelli is honoured in the Gardens of Casaloldo e Castelbuono.