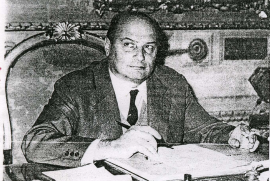 
I was born into the only Jewish family of Imola and in November 1938 I was the only Jewish girl expelled from the elementary school at age 8. Very cautiously, my parents tried to explain me why, but for me that was impossible to understand. From then on and for the whole duration of elementary education at my home there was a patient elderly woman, a retired teacher, descending from a family of socialists, who gave me tuition on a daily basis, but I lost all class mates. Only a few of them came to play with me all the same. Every year I went to hold the exams privately to pass to the following class and I was kept in a separate desk, like a leper. I prepared for two years of middle school with my mother, a Literature graduate, and a university student of Mathematics for the scientific subjects.
In Autumn 1943 my family had already been displaced for months having evacuated to a small village ten kilometres away from Imola out of fear of the bombardments, when the Germans ransacked our home; my father decided it was no longer safe to remain there. For almost two months we found shelter in the Apennines close to Tuscany, at the home of some peasants; then the fascists arrested two of our cousins who were in hiding a few kilometres away from us (one of them would later die in Auschwitz) and therefore my Dad made the decision to follow the route that had already been traced by his elder sister who had already left to Switzerland. We would try to escape, too. We moved to the plain at the home of my Grandma’s housemaid, waiting to reach Como and the border, but that was not easy because we did not have any forged documents.
At that point came to see us Amedeo Ruggi, a 23-year old guy, who was the nephew of the Catholic husband of Dad’s youngest sister. Ruggi, who hated the fascists since they had beaten his father to death and deafened his uncles, dealt with our departure carefully. After some days he appeared wearing an army uniform, accompanied by a driver on a car by which we reached the Modena railway station when it was dark. The only train to Milan was already crammed, so we got on a ware wagon packed up with people sitting on the floor. We spent some hours waiting for the train’s departure, as it had been halted by a bombardment on the rail line, and while we waited, a passenger was stolen his wallet. In the dark, a voice said it was necessary to call the German voluntary service that was onthe platform, but Ruggi very promptlyreplied he was an officer and he would find the wallet again: it in facts came out, with great relief for the whole of us
After an exhausting journey we arrived at como late in the morning and we had to wait until the afternoon to move to the village of S. Fermo, where we had an appointment with the smuggler who had to take us to the border. The day passed on with us sitting on a bench, eating at a trattoria and a lot of strolling around, until we left on a public car. After a few kilometres the driver stopped the car next to a military station and blackmailed my father by saying: “Either you give me 10,000 liras or I report you, because I got what you are about to do”. Ruggi threw himself onto him to beat him, but my father preferred giving him the money in order to go on. Once we arrived at the house in the country that had been indicated to us, a woman put us into the sheepfold and told us to wait. We remained there for many hours, without eating and in the anguish of having fallen into a trap, when finally a man wearing a trench and a balaclava cap fetched us. We had to walk for one hour in a wood without uttering a single word – he explained to us – and then slip under the border net that he himself would lift as little as it was necessary to let us go one at a time without making the alarm bells that had been fixed to them ring. Beyond the network there were two hundreds metres of “no man’s land” where the Germans could shoot and thus we had to run without turning back even though we felt the dogs bark or the shootings. We thus rushed off to leave after giving a hug to Ruggi, to whom my father gave a half of a piece of paper, of which he kept the other half, and the money agreed with the smuggler, who had to be paid only after taking us into rescue: once back he would give Ruggi the half of the piece of paper as a confirmation.
I was the first one to go through the net and rush off for those two hundred metres, almost clashing with a Swiss sentinel. Then my mother and in the end my father, who gave the piece of paper to the smuggler, to be delivered to Ruggi for the agreed payment. In the end we had gotten into safety!