co-founder of OSCAR, together with Don Giovanni Barbareschi 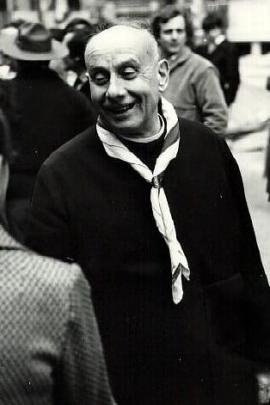 Mons. Andrea Ghetti (Baden) was born in Milan on March 11, 1912. When he was fifteen years old, Baden pronounced the scout promise. In the meantime, however, the fascist regime ruled the dismissal of the Catholic Scout Group ASCI - joint by both Baden and his brother Vittorio. Thus, in the autumn 1929, Ghetti joint the clandestin scout group Aquile Randagie.

Ghetti studied philophy and graduated in 1935. In his defense, he refused to wear the mandatory fascist black shirt. After a few days, he became a priest in the Rome's Lombard Seminar and celebrated his first function in the S. Maria Incoronata Church (his native church) in 1939. Afterwards, he started teaching history, philosophy and religion first in Lecco and then in Milan. In these years, he met and became friend of mons. Montini (Pope Paolo VI).

During the war, he founded together with Don Giovanni Barbareschi - to whom a tree in the Garden of the Righteous has been dedicated in 2014 - the clandestine organization OSCAR (renamed Soccorso-Collocamento Assistenza Ricercati), whose intent was to rescue those persecuted by the nazi-fascists.

Ghetti and the others risked their lives and freedom to save men, women, families, soldiers, clergymen, anyone who was victim of such violent oppression. He brought back in Italy also several people deportated in the lager, providing them with hope, first-aid and the consolation in faith.

In 1945, Ghetti has been nominated regional Ecclesiastic Assistant at the ASCI Lombardia. With the support of the Archbishop of Milan Alfredo Ildefonso Schuster and the help of his brother Vittorio and Giulio Cesare Uccellini, he promoted the rebirth of the catholic scout groups in Lombardia.

In the post-war, he is particularly active in the charity work. He raised money in favour of the mutilated of Don Gnocchi, the Polesine's population hitted by the flood, the Hungarian refugee escaping from the revolution and the displaced persons of the Vajont.

Ghetti was also a journalist: he directed since its foundation the monthly newspaper "Il Segno" and the scout magazine "Servire".

He died on the 5th August 1980 in a car-accident in France, during a summer camp of his scout group. In 1980, he and his brother were awarded with the "Ambrogino d'oro" - a distinction for merit of the city of Milan.

Reported by the niece Giulia Negri for Monte Stella - Ceremony 2018