the families that hosted the Jews fleeing from Rome 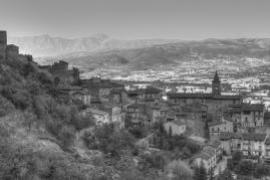 
In 1943, a family of Jews from Rome knocked at the door of the De Bernardinis’, in the small hamlet of Casentino in the Abruzzi. They were Alberto and Clelia Di Consiglio with their six children. Clelia was pregnant. With only a few belongings piled up in a pram, they ran away from persecution and hunger in the city of Rome occupied by the Nazis. The De Bernardinis hosted them in their barn and time by time the fact of sharing hardship and fear would foster a great friendship between the two families. “The De Bernardinis gave us everything without asking us for anything back”, recalls Letizia Di Consiglio, daughter to Alberto and Clelia.
When the Germans inspected the place, the family from the Abruzzi disguised Alberto as a worker.
On 21 October 1943 Clelia delivered her daughter Roberta hidden in a stable of the De Bernardinis in the neighbouring city of Fossa. Maria De Bernardinis had the baby baptized to protect her, so that she could have “of pure Aryan race” written on her birth certificate: this way she gave her a new life.
Nearly thirty people, or five families, were the Jews rescued by the inhabitants of the cities of Fossa and Casentino between half of 1943 and the arrival of the Allied forces one year later.
Until 7 April 2009, for the cousins Alberto Di Consiglio and Leo Terracina, grandchildren of Alberto’s and Clelia’s, this tale belonged to the past. The only memory was the fact that their parents left every Friday evening, for the Shabbat, some blessed bread for their saviours. When there was the earthquake in the Abruzzi, and Fossa and Casentino were among the worst hit places, the Di Consiglios felt again the need to express their gratitude. Alberto and Leo immediately contacted the mayors of the two cities to bring aid. They managed to talked on the phone to Nello, the son to their parents’ rescuers, whoo says he needs nothing, but they do not surrender, they join the solidarity initiatives of the Jewish Community of Rome and they succeed in reaching Nello and the rest of the De Bernardinis under the tents where they live now. Nello’s home has collapsed, the one of his son has not yet received the certificate of readiness to be inhabited.
In the meanwhile the media and institutions have arrived. The tale of the De Bernardinis becomes world-known, is in the US and Israeli newspapers. Riccardo Pacifici, President of the Jewish Community of Rome, says he wants to work hard toh ave the title of Righteous among the Nations bestowed on this family from the Abruzzi. Irena Steinfeldt, President of the Righteous Department of Yad Vashem, invited the Jews from Rome who were rescued to tell about their story to her Institution. With the earthquake in the Abruzzi numerous tales and pieces of testimony have resurfaced, still to be documented in many cases, and of Jews who have gone to the rescue of their saviours. Many of them went to the hotel and left their homes to their friends hit by the quake. From all these stories Pasquale Squitieri has drawn his movie Il Giorno della Shoah (The day of the Holocaust).

Gardens that honour De Bernardinis and other rescuers from the Abruzzi