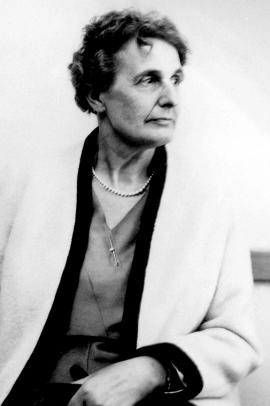 Adélaïde Hautval was born into a Protestant family in 1906 in Alsace when this was still a German province. She studied Medicine in Strasbourg and worked in the neuropsychiatric hospitals and institutes. In April 1942, while she was returning home from her mother’s funeral, Adélaïde was arrested in the train station of Bourges for crossing the border without a permit. During her time in jail, while she was awaiting trial, Hautval vehemently protested against the harsh treatment handed down to the Jewish detainees. The reply she received was: “If you want to defend them you will share their fate”. Thus she was interned in Pithiviers, subsequently moved to Beaune-la-Rolande, then to the prison of Orléans in November 1942, to the jail of Romainville and eventually, in 1943, she was deported to Auschwitz. According to Adélaïde’s testimony, she was sewn a symbol on her clothes, with the writing “a friend of the Jews”. In Auschwitz, she helped hide a group of typhus-stricken women and she looked after them.

She was then asked by the SS doctor, Eduard Wirths, to take part in the sterilization experiments practised on Jewish women in Block 10, which entailed the surgically removal of the ovaries and the radiations that caused sterility. Adélaïde refused to do that and she was moved to the close camp of Birkenau, where she kept on working as a doctor and treating the patients. In August 1944, she was deported to the women camp of Ravensbrück in Germany. She survived and she was freed in April 1945. In 1946, the doctor wrote “Medicine and crimes against Humanity”, which would be published in 1991, after her death.

In 1962, a Polish gynaecologist, dr. Wladislaw Dering, a London resident, sued for defamation the well-known writer Léon Uris, author of the book Exodus, who had overtly reported him for taking part in the sterilization experiments on the women in Auschwitz. Hautval was called to bear testimony at the trial against Dr Dering, whom she had seen operate at Block 10. During the final verdict, judge Lawton said: “Dr Hautval, you are probably the most amazing and brave woman who has ever born testimony before a British court. You are astounding! You have taken sides in front of the SS doctor Wirth expressing what you meant to do and what you would never do. Your refusal to submit to doctor Wirth’s questions will remain in the annals of British justice for a long time”.
On 18 May 1965, Adélaïde received the Medal as Righteous among the Nations. On 12 October 1988, after being diagnosed with Parkinson disease, she committed suicide.