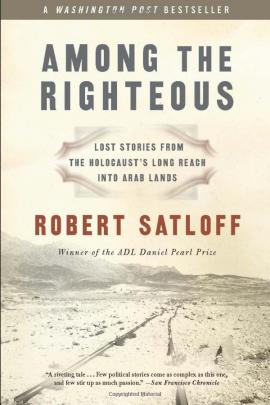 Stories of Arabs who rescued Jews during the Holocaust
taken from Robert Satloff’s book Among the Righteous. Lost stories from the Holocaust’s long reach into Arab lands, Marsilio, Venice, 2008

Taieb el-Okbi
One of the main sources of pro-Jewish sympathy among the Arab population of Algiers was the Muslim religious establishment. Here the shining star was Abdelhamid Ben Badis, the leader of the Algerian Islah (Reform) Party, an open-minded man who also directed the Algerian League of Muslims and Jews. Unfortunately he died in 1940 and was therefore unable to lend his strength and charisma to the Muslim reaction against Vichy. This mantle fell to Shaykh Taieb el-Okbi, another reformist with close links to the most eminent Jews in Algiers, who often directed Jewish funds towards el-Okbi’s charitable works. El-Okbi showed his mettle at the beginning of 1942. When he heard rumours that the leaders of a French pro-Fascist group the Légion Français des Combattants, were inciting Muslim troops to conduct a pogrom against the Jews of Algiers, el-Okbi did everything in his power to stop them, including officially forbidding anyone to harm Jews.
Compared to the celebrated French archbishops Saliège and Gerlier, both recognized by Yad Vashem, el-Okbi’s personal risk was much greater.

Khaled Abdul Wahab
See this link for his biography

Si Kaddour ben Ghabrit (1868-1962)
Si Kaddour ben Ghabrit directed the Great Paris Mosque between 1920 and 1954. During World War II he turned it into a shelter for people forced to flee. He issued countless Jews with false Muslim identity papers, had Jewish children taken in by Muslim families, hid the persecuted in the basement and in the underground passageways of the mosque and even changed the headstones in the Muslim cemetery to give Jews the identity of the people buried there. When the Germans knocked on his door, he led them into the prayer hall and reminded them that they were in a place of worship. According to some sources he rescued 500 people, according to others 1,500. Contacts between ben Ghabrit and the persecuted were kept by Dr. Assouline, who claims that he procured no fewer than 1600 ration cards for them. Ration cards were issued to individuals, so this is why ben Ghabrit is thought to have saved so many lives.

Si Ali Sakkat
Another rescue story that had been completely lost is that of Si Ali Sakkat, a Tunisian nobleman and the heir to an ancient liberal family. At a certain point in the war in Tunisia, with bombs falling all around them, some sixty Jewish workers managed to escape from a forced labour camp. Looking for shelter, the group turned up at the gates of Si Ali’s farm. This man, who had also held ministerial posts in the government of his country, had no hesitation in welcoming all the fugitives into his home, feeding them and keeping them safe until the Allied victory.