deported to Flossembürg Camp after having joined the Resistance movement 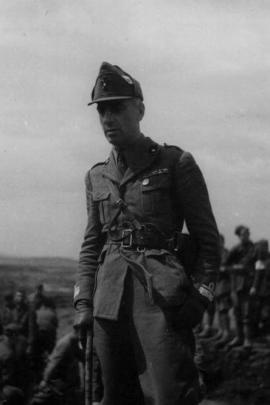 The General Guglielmo Barbò di Casalmorano, who was born on August 11, 1888, in Milan, studied at the Military Academy in Modena. During the First World War, he became Lieutenant and on May 1916 he received a bravery award for what happened in the Monfalcone fighting. On September 16, 1917, he has been nominated Commander of a Squadron of the Savoy Cavalry Regiment and on November 1918 he has received a second bravery award for the fightings in Udine.

Barbò was more attached to the House of Savoia rather than to the Mussolini's regime - that he still tolerated, due to his role in the army. After the Great War, he occupied several important positions and in 1942, on the occasion of the Campaign in Russia, he has been nominated Brigadier General. Here, he witnessed to heinous atrocities, which contributed to his deep aversion for the crimes committed by the nazi-fascists.

After September 8, 1943, he refused to join the Italian Social Republic of Salò and he became a member of the Resistance movement. He managed to escape several time to the arrest, but eventually he has been captured and jailed in the San Vittore Prison in Milan. From here, he has been deported to Germany: he first passed through the Bolzano Camp and then was transferred to the Flossembürg Camp. Here, he was together with his group of the Pinerolo Barrack, with whom he tried to steal the munitions from the German Command after the Armistice. Despite the terrible living conditions in the camp, he continued to support his comrades until his tragic end, on December 14,1944.