the great man behind a rescue network for Jews and antifascists 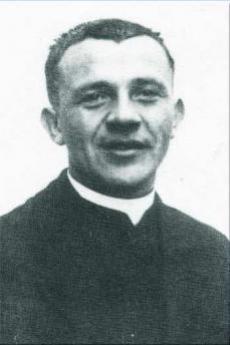 Father Elio Monari was born on 25 October 1913 in Riola, a hamlet of Spilamberto (MO) into the family of Augusto and Luigia Ori, sharefarmers. He attended the elementary school in Maranello (MO), since his family had moved to another agricultural good. In 1924 he entered the Istituto Sacro Cuore of Modena as a convittore to attend the gymnasium. In the school years 1927-28 and 1928-29 he continued attending the gymnasium at the seminar of Fiumalbo. It was then that he started maturing his calling to the priesthood. In 1929 he entered the seminar in Modena; he was ordained priest as he was much younger than when people usually are, on 28 June 1936. In 1937 he obtained, as an external candidate, his Grammar School diploma from the liceo Muratori of Modena and, after a short job term as a teacher at the seminar of Nonantola ( from 5 January 1936 to 5 September of the same year), he was employed at the college of S. Carlo di Monteombraro where he remained until 1939. In that year he moved to teach at the Modena seminar.

In 1937 he enrolled at the Università Cattolica di Milano at the Faculty of Arts and he graduated in 1941. He kept on working as a teacher of Latin and Greek literature in the Modena seminar until 1943; then, due to his engagement in the Resistance, he moved to the parish of San Biagio, run by Mgr. Carlo Dondi. His very superiors suggested him to leave his post as a teacher because he was now too exposed. In 1938 he was appointed assistant of the Inter-diocesan Federation of the Youth Associations of Catholic Action (Italian acronym: GIAC) where his commitment turned out to be previous: in that period GUAC grew both from a quantitative and from a qualitative point of view.

He was among the protagonists of the civil Resistance in Modena and, with people of different political ideal, other priests and common people from every walk of life he managed to weave the tight nodes of a rescue network that worked in from the Modenese mountains to the “ Bassa”, as the flat Southern countryside is called here.

Close aides to him were Odoardo Focherini, father Arrigo Beccari, father Dante Sala, father Benedetto Richeldi, Giuseppe Moreali (all of them Righteous among the nations), Arturo Anderlini and Alfonso Paltrinieri, shot dead at the shooting polygon of Modena in February 1944. The network also comprised some Jews, among whom we should remember Guido Melli, a well-known Modenese antifascist who was arrested for political reasons and deported to Auschwitz, where he died, Fortunato Uzzielli, an antifascist from Ferrara, and Goffredo Pacifici, the man who took into safety to Switzerland the group of the kids of Villa Emma in Nonantola with the people accompanying them.

Thanks to the network activated by father Elio, many allied soldiers who had escare the concentration camps of Modena and the Fossoli camp near Carpi, as well as numerous Jews, managed to expatriate to Switzerland or cross the frontline.

Other people who found shelterin Modena were a significant number of Jews from Ferrara who had fled the Estense town after the massacre of 15 November 1943, including the then rabbi of Ferrara Leone Leoni with his wife and their two children. The Leonis remained hidden until the end of the war.

On 20 May 1944, as it had become too dangerous for him to stay in Modena, he went to the Val di Secchia (the Valley of the Secchia river) where some Modenese partisan groups operated. From there he moved to Montefiorino, he assumed the name of father Luigi and he was captured by the Germans in Piandelagotti on 5 July 1944. He was moved to Florence and executed by shooting, together with captain Enzo Feliciani, on 16 July at dawn. His remains were found again only in 1956. Today he is buried in the cemetery of Rifredi (FI).