the Englishman who successfully evacuated 669 children from Prague 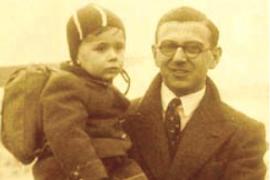 Nicholas Winton with one of the rescued children

Testimony taken from the BBC report for the seventieth anniversary of the Kindertransports - Prague, 28 August 2009

Nicholas Winton was born in England in 1909 of a German Jewish family. He worked in various banks in Berlin and Paris. In 1938 he became a stockbroker in London. In September of the same year Hitler invaded the Czechoslovak Sudetenland. Winton was about to leave for a skiing holiday in Switzerland, when he received a phone call from a friend at the British Embassy in Czechoslovakia asking him to cancel his holiday and immediately come to Prague: "I have a most interesting assignment and I need your help. Don't bother bringing your skis." The assignment involved helping the hundreds of refugees living in temporary camps in appalling conditions. In Prague there were numerous volunteers working mostly as anti-Nazi political militants, but Winton had no illusions about the future awaiting the Jews and had no intention of limiting his efforts to “first aid”. Operating in occupied Prague, constantly at risk of arrest, he had a broader project in mind, namely to find British families who would take in refugee children. For this he obtained the go-ahead from the British Home Office. While Nicholas returned to London, directing the operations after work, his colleague in Prague, Trevor Chadwick drew up a list of children ready to leave. This was the beginning of the Kindertransports, eight trans-European train journeys that saved the lives of 669 children. The evacuations came to a stop on 3 September 1939, when the train leaving from Prague was halted because war had broken out. During the conflict Winton fought in the Royal Air Force achieving the rank of Aeronautical Officer. In peacetime he observed strict silence about his story until, in 1988, his wife Greta discovered a notebook in which he had written down the names of all the children saved and details of the families that had taken them in. From that moment on Winton became a highly popular figure and was a candidate for the Nobel Peace Prize several times. In 2009 in Prague another trans-European train journey was organized to commemorate the Kindertransports. On that occasion Winton declared: “The real tragedy was that no other country did as much. I tried to heighten awareness of the problem with the Americans, but they would not agree to take in a single child. If they had, it would have made all the difference”. Winton is now 100 years old and many of his rescued children form part of his extended family. Sir Nicholas Winton passed away in his sleep on the night between 1 and 2  July 2015, the anniversary of his most successful Kindertransport in 1939.