the consul who set up the "rescue train" 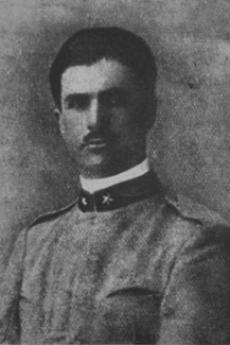 Other sources: the diary of Captain Lucillo Merci

Giuseppe Michele Mario Castruccio was born in Genoa on 11 September 1887. During the First World War he was called up and became a lieutenant and airship pilot. The night of 22 September 1917 he rescued an airship that had been hit by the Austrians: he climbed on top of the vehicle and remained there for an hour while it gradually lost height and crash landed. This act of bravery earned him a gold military medal from king Vittorio Emanuele III, an honour usually awarded posthumously.

After the Great War he entered the diplomatic service. On 18 June 1943 he replaced Guelfo Zamboni as head of the Italian Consulate General in Salonika and continued Zamboni’s efforts to rescue Greek Jews from deportation to the Nazi extermination camps, thanks to false Italian nationality certificates. In July Castruccio organized the “rescue train”, a convoy that was to take Jews with Italian passports from Salonika to Athens, in the Italian-occupied zone. Captain Lucillo Merci, stationed in Salonika as an interpreter, recorded that period in his diary and on 14 July he described the train’s departure for Athens: “At 6.45am the Consul Dr. Castruccio and I were at the railway station.

The captain of the S.S. Dieter Wisliceny was already there with his men. We saw the deportees arrive. The Germans immediately checked the papers of the individual Jews, who all had documents issued by the Consul. No fewer than 323 of them passed in front of him, under the watchful eye of a dozen members of the Gestapo […]. Men, women, healthy and infirm elderly people, youngsters of both sexes and children of all ages”. The following day Merci recorded: “The Consul General M. O. Comm. Castruccio granted Italian citizenship papers to even more people, including the offspring of mixed Jewish and Aryan marriages, who were declared minors, although they were actually over 25 years of age. Papers were also granted to Jews actively pursued by the Gestapo who bravely turned up at the Consulate begging for protection”. On 30 July Merci summed up the Italian consulate’s efforts: “No fewer than 113 Jews and 323 Italians or neo-Italians were saved from certain death and sent to Athens (in the Italian-occupied zone), thus escaping deportation to Poland. In short, as many Jews as possible were helped to regain possession of the houses that had been requisitioned, the homes taken from then, the right to exercise their profession, the assets they had been stripped of by the SS, including money and jewelry”.

On 11 August Castruccio sent a telegram to the Royal Ministry of Foreign Affairs and the Royal representative of Italy in Greece: “The last remaining Jews in the ‘Baron Hirsch’ Ghetto departed during the night between 10 and 11 August. The Jewish colony in Salonika, founded before the discovery of America and which had numbered some 60 thousand people, is no more. It was liquidated amid atrocities, horrors and crimes such as I had never heard of in the history of all time and of all peoples".

After 8 September the Germans occupied the Consulate in Salonika but Castruccio had already destroyed all the documents testifying to what had happened. Captain Merci was arrested by the Germans on his return from Italy and Castruccio intervened decisively with the Nazi command for his release. In fact, on 10 September Merci wrote: “I was able to inform the Consul General Dr. Castruccio that I had arrived and was being held prisoner in the former Makedonikon Hotel. Immediately – as I afterwards learnt – he went to General von Löhr’s office and demanded that I should be allowed to continue my work for the Consulate in favour of the sizeable Italian community which, minus the Jews no longer present, numbered over 6,000 people”. Castruccio’s request was granted and captain Merci continued his commitment in Salonika up until December 1943, when the Consulate was closed and all its staff returned to Italy.
Giuseppe Castruccio died in Genoa on 3 June 1985, at the ripe old age of 97.