they saved 2.000 Jews with a bold protest on Berlin's Rosenstrasse 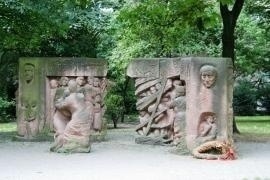 The monument &quot;Block der Frauen&quot; by Ingeborg Hunzinger to commemorate the protest

Seventy-five years ago, in February and March 1943, hundreds of women rescued 2,000 Jews, their husbands, from the jaws of death with a daring protest on Berlin’s Rosenstrasse. They gathered there for more than a week, in spite of repeated commands by the authorities to “clear the streets or we’ll shoot.”

The Gestapo’s massive “de-Judaization of the Reich territory” that began on February 27, 1943, had imprisoned nearly 2,000 intermarried Jews to a pre-transportation facility at Rosenstrasse, as part of the final roundup of Berlin Jews.
For Jews and gentiles married to Jews, mundane customs became tests of strength through an ever-growing web of prohibitions and punishments.
The Nuremberg Laws of September 1935 criminalized sexual relations between Jews and non-Jews as “racial defilement.” Following the Kristallnacht pogrom of November 1938 the Gestapo began a campaign to threaten and cajole non-Jewish German women married to Jews into getting a divorce. By the fall of 1941, regulations required Jews to wear the Star of David in public and banned friendly relations with Jews. Many parents of women married to Jews abandoned them and once-friendly neighbors and co-workers froze them out.

Hitler conceded, temporarily, to the brave women on Rosenstrasse. To protect his claim of popular consensus, Hitler sanctioned a series of exceptions for intermarried German Jews, privileging some who thus did not wear the Jewish Star, and “temporarily” exempting all intermarried Jews – including those who did wear the star – from the genocide. This exemption, however, could end at any moment.
Hundreds of German intermarried Jews were drawn into the Holocaust on false charges and some in Berlin were deported and murdered at the time of the protest. Also, as soon as their non-Jewish partners agreed to divorce, the Gestapo deported their Jewish former spouses.

In Dortmund-Höede a few weeks after the Rosenstrasse protest, a crowd of three to four hundred women successfully protested the arrest of a soldier, according to a Nazi police report. Their “energized shouts of ‘give us our husbands back!’”echoed the exact words of the cry of the protesters on Rosenstrasse, suggesting that news of it had traveled.

In the city of Witten on October 11, 1943, according to the police, several hundred women demonstrated in Hitler Square to “force” the authorities to deliver their ration cards in their home town of Witten and not just in the civil defense evacuation sites they had been moved to.

Gestapo force could certainly prevent women from returning to their home cities, but he questioned whether it was the “appropriate means.” On January 24, 1944, Hitler ruled against all forms of force in the matter, prohibiting even the soft coercion of using the distribution of food rations to control unruly evacuees. Hitler did not think terror was the best means to reach all his goals, and he became more popular and caused far more destruction because he used a range of tactics, rather than always lashing out with blind force.

The journalist Georg Zivier, a Jew imprisoned at Rosenstrasse who was married to a gentile among the protesters, extolled the protest immediately after the war as a “flare of a small torch that might have ignited a general resistance to arbitrary tyranny” – if only the public had joined in. From the women who demonstrated in Rosenstrasse we learn how public and collaborative protests are not just a way to "let off steam", but an important political tactic, when rulers turn their backs on them. The Rosenstrasse protest 75 years ago was a vanguard, a lesson from last century to hold high for our own.

Based on the article by Nathan Stoltzfus and Mordecai Paldiel

Gardens that honour The Women of Rosenstrasse

The Women of Rosenstrasse are honoured in the Garden of Milan - Monte Stella.