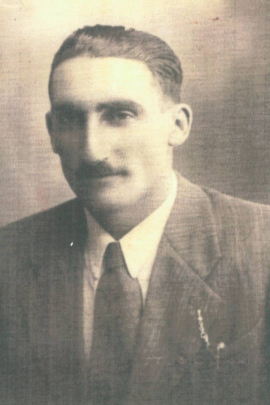 Alessandro Cofini was born in Massa D’Albe in 1911. Despite the constant risk of arrest and shooting, with the help of the siblings Armando, Enrico and Giuseppina and his stepmother Berardina, he hosted the jewish family Nathan in his home in Forme (Joe Nathan and his wife Peggy, daughters Amelia, Giorgina, Virginia).

After the promulgation of the racial laws in 1938, the Nathan family left for Australia in December of the same year. A few month later, Joe Nathan had to return to Italy to settle some business and there he got sick, forcing the rest of the family to return to the country. On their return, the fascists seized their passports and the fate of the family seemed sealed. Alessandro Cofini and his brothers met the Nathan family when - after the death of his uncle Emilio in 1941, who until then had been the head of the family business - they rented the “I Galli” estate, owned by the Nathan, for the wintering of their livestock.

After 8 September 1943, the freedom of the Nathan family was increasingly threatened: Joe Nathan was one of the best known Jews in Rome and his Australian wife Peggy was considered an "enemy" of the fascists. Alessandro and his brothers, who had already repeatedly offered to host the Nathans in their home in Forme (AQ) in case they were forced to flee Rome, offered refuge to Joe Nathan, who decided to accept. A relationship of friendship and trust was born between Joe and Alessandro.

Everyone was aware that those who gave hospitality to Jews could be arrested or even shot, but despite the prohibitions Alessandro personally took care of the transfer of the Nathan family, in the year in which Rome was completely in the hand of the Nazis. Alessandro made an appointment with the Nathan family near the Avezzano Station and from there, he accompanied them to Forme with his “cart”, the same one he would use to bring them back to Rome later on when the situation improved.

The whole Cofini family warmly welcomed the Nathan. Even when the Germans arrived in Forme, Alessandro and his brothers did not lose heart and continued to protect Joe Nathan and his loved ones. Even when, on 7 October 1943, an entire German garrison suddenly requisitioned some houses in the country. Alexander with the help of his brothers resolutely opposed the requisition of his home by the Germans, with the excuse that their guests were relatives left homeless. He made sure that the Nathan family would not be discovered. Alessandro Cofini managed to keep the Nathans hidden for two months, doing his utmost to make their stay as easy as possible, allowing them to escape deportation.

Virginia Nathan, who died on 7 March 2009, after the end of the war went to Forme several times to personally thank Alessandro and his siblings. During one of these visits, in the mid-1980s, she was accompanied by an English prisoner who was also hidden in Forme whom she and her family, together with the Cofinis, helped and fed while escaping from the Germans.

Alessandro Cofini is honoured in the Garden of L'Aquila - National Boarding School.