an introverted diplomat for peace, he increased the executive role of the Secretary General in peace operations 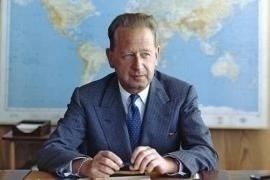 Who Dag Hammarskjöld was must be explained from the beginning, from his youth, which laid strong foundations for his future mission. He was born in Jönköping, Sweden, and was the youngest of the four children of Agnes Almquist and Hjalmar Hammarskjöld, who was Prime Minister of Sweden, a member of the Hague Tribunal, the Governor of Uppland and Chairman of the Nobel Foundation Board. Dag Hammarskjöld spent his childhood and adolescence following his father’s movements: first in Denmark, then in Uppsala, later in Stockholm, during the three years in which Hjalmar Hammarskjöld was head of the government. "I inherited from generations of soldiers and government officials, on my father's side, the conviction that no life was more fulfilling than that of selfless service to one's country or to humanity. I have learnt from scholars and clergymen on my mother's side the certainty that all human beings were equal as children of God", declared the UN Secretary General in 1953.

His main intellectual and professional interest, for several years of his youth, was political economy, always pursued based on his ideals. Graduated in economics and law, he worked thirty years in Swedish and international financial affairs, then he was appointed under-secretary at the Ministry of Finance and head of the Bank of Sweden. With his older brother, Bo, who was then under-secretary at the Ministry of Social Security, Hammarskjöld also drafted the legislation that paved the way for the creation of the current "welfare state" and, as an international financial negotiator, drew attention to the talks that organised the Marshall Plan. Hammarskjöld then played an important role at the Ministry of Foreign Affairs of his own country, pursuing a policy of international economic cooperation while remaining far from belonging to any party.

Hammarskjöld represented Sweden for the first time as a delegate at the United Nations in 1949 and again from 1951 to 1953. Receiving fifty-seven out of sixty votes, he was elected Secretary General of the United Nations in 1953 for a five-year term and was re-elected in 1957. He devoted himself to this cause, trying to build a solid operational base for the Organisation; he wrote a set of regulations for his Secretariat, which defined the responsibilities of members towards the international organisation to which they belonged and claimed their independence from strictly national interests.

During those years, he acted in favour of populations threatened in various conflicts, through what he liked to call "preventive diplomacy", seeking to establish greater moral independence of choice in the very position as Secretary General. He personally negotiated the release of American soldiers captured by the Chinese in the Korean War; during 1956 Suez Canal crisis, he worked to persuade the United Nations to invalidate the use of force by Israel, France and Great Britain and commissioned the United Nations Emergency Force (UNEF), the first one to be mobilised by an international organisation; he headed the establishment of the United Nations Observation Group in Lebanon and the United Nations Office in Jordan, leading to the withdrawal of the American and British troops that had been sent there. His effort in these crises led to new procedures for the UN: the use of UNEF, the use of UN "presence" in critical areas of the world and an increasingly executive role for the Secretary General in peace operations.

In this spirit, Hammarskjöld dealt with issues arising from the new independence of a number of developing countries with the United Nations. The hardest case, that of the newly liberated Congo, arose in July 1960, when the new local government - faced with the mutiny of its army, the secession of its Katanga province and the intervention of Belgian troops - asked for help from the UN, which responded by sending a peacekeeping force and Hammarskjöld was in charge of operations. The initially very complex and dangerous situation worsened when, in September 1961, Hammarskjöld arrived in Leopoldville to discuss the details of UN aid with the Congolese government and learnt that fighting had broken out between Katanga troops and non-combatant UN forces. The death toll was estimated at between 30 and 200, mostly among Katanga troops, but also blue helmets.

A few days later, in an attempt to obtain ceasefire, the Secretary left by plane for a personal conference with Katanga President Tshombe and never came back. It was the night between 17th and 18th September 1961. "Hammarskjöld was about to achieve something when they killed him. Note well, I said 'they killed him'", stated former US President Harry S. Truman, then seventy-seven years old, on 18th September 1961, in the aftermath of the plane crash involving the second UN Secretary General Dag Hammarskjöld and 15 other people, in the jungle a few kilometres from the runway of Ndola airport (a city in then Northern Rhodesia, now Zambia). Even today, also following the latest UN investigation into the case, concluded in September 2019 by Tanzanian Prosecutor Mohamed Chande Othman, it has not been proven yet whether it was an accident or not, but what is certain is that circumstances under which it occurred were far from transparent.

Hammarskjöld received the Nobel Peace Prize posthumously in the same year, "for having built an efficient and independent UN Secretariat and for having taken an independent line towards the great powers. For having organized a peacekeeping force in the Middle East after the Suez crisis and for his commitment to peace during the civil war in Congo".

His journal, Markings, published in 1963, revealed posthumously the spiritual and inner part of the diplomat who was an upstanding lover of literature, with a hint of delicate irony.

Dag Hammarskjöld is honoured in the Garden of Milan - Monte Stella.