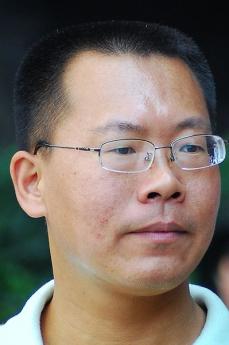 Teng Biao is a young Chinese lawyer and a lecturer at Beijing’s University of Politics and Law. He is also a friend of Hu Jia, who he assisted and actively supported when he was arrested. Together they wrote an open letter entitled “The Real China and the Olympics”.
In 2005 he came under the spotlight when he and another lawyer, Chen Guangchen, denounced the abuses perpetrated in the eastern province of Guandong: seven thousand abortions and compulsory sterilizations, in a rural area in which this practice is still widespread. The enormity of the abuses and maltreatment to which these women were subjected was taken up by the international press and published in Time magazine, causing considerable embarrassment to the Chinese authorities.
As a supporter and defence council of various human rights activists, in 2007 Teng Biao received the French Presidential Human Rights award.
On 7 March 2008, Teng was arrested by the State security police and illegally detained for two days before being released without charge. During his detention he was threatened with renewed arrest and the loss of his job at the university if he failed to stop supporting Hu Jia, writing about the Olympics and agreeing to interviews with foreign journalists. Despite these threats, just a few days after his release, Teng Biao joined sixteen other lawyers in an initiative in support of those arrested during the independence for Tibet protests: in an open letter, the signatories offered these unfairly detained men legal assistance. As a result, in May the authorities suspended the renewal of Teng’s licence to exercise his profession, thereby preventing him from taking part in legal action, especially in view of the forthcoming Olympics. For this reason, during the Games, the dissidents’ lawyer decided to leave Beijing temporarily, to escape the mounting pressure on his person. On 14 August the Dutch newspaper “De Pers”, published an interview, entitled “I am not afraid”, released the night before Teng Biao – one of the last human rights supporters still active in Beijing – left the capital.
Already in 2007, Teng had told a Dutch radio station: "I know I risk being sent to jail and losing my job at the university or being beaten up by the police, but I am not only struggling for myself. I am struggling for my daughter and for her generation. I want them to be able to live in a society without fear ". Teng has always acted within the limits of Chinese law, but in spite of this he runs enormous risks because in actual fact he cannot know if and when he will be punished. He says he is not frightened by the continual and strict controls he is forced to undergo, nor by the acts of intimidation. On the contrary, they strengthen his resolve to fight against this system. So - reports “De Pers” - for Teng this is just a short break, before going back once the Olympic Games are over.