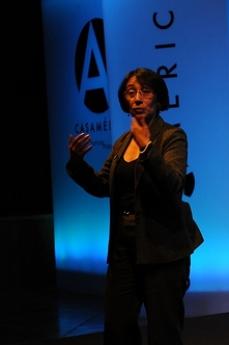 Born in 1966, Norma Cruz is a women’s rights activist in the struggle against domestic and sexual violence and human trafficking in Guatemala. In 1999, after her own daughter was raped by her step-father, Norma contacted other women and launched a campaign to heighten awareness of the issue of domestic violence and abuse that affects thousands of young Guatemalan girls. In 2002, after the lengthy trial of a man accused of such crimes, Norma managed to secure a conviction. In order to embrace a legal method of struggle that would allow her to achieve this result, Norma Cruz had left the militant underground organization Ejército Guerrillero de los Pobres of which she had been an active member.
During the trial, Norma and her daughter set up the Fundaciòn Sobrevivientes to support hundreds of rape victims determined to seek justice. Her foundation also guarantees support for the families of murdered women.
In 2006, backed by numerous female members of parliament, Norma successfully obtained state funding to set up a centre that provides legal aid and psychological support for between 1000 and 1500 women a year.
In 2007 alone, the Survivors Foundation helped trace, bring to trial and sentence 30 men accused of murdering women. In 2008 it offered protection to a girl that had been kidnapped and raped and who had bravely denounced her tormentors, identified among the members of the State security forces. In retaliation, a member of the Foundation, herself related to Norma, was in turn kidnapped and threatened with death. Norma Cruz and her team are in constant danger and have to be protected round the clock.
Norma is also active in the fight against human trafficking, which includes the kidnapping of new-born children as well as illegal adoptions. She has openly named and shamed members of Guatemala’s judiciary, accusing them of conniving with the traffickers; she has also appealed to the International Commission against Impunity in Guatemala to investigate the behaviour of the magistrates in question.
In March 2009, along with 7 other women from all over the world, Cruz’s achievements earned her the U.S. Secretary of State’s 2009 International Women of Courage Award. The award, founded in 2007 by then-Secretary of State Condoleezza Rice, celebrates exceptional courage and leadership in advocating for women’s rights and advancement.